Cute Kittens Lose Out When It Comes to Online Ad Sales

"Publishers can take images that they already own and create a new stream of revenue by using them to create programmatic advertising," says PopMarker CEO Sarper Kocabiyik.

NEW YORK, N.Y., Nov. 10, 2015 (SEND2PRESS NEWSWIRE) — Photos of kittens are cute, but clothing and food are where it’s at when it comes to online advertising. PopMarker, creators of the advertising industry’s most advanced platform for programmatic and in-image advertising, found that fashion and food are the most likely to lead to views, which can in turn generate cash for publishers.

PopMarker reports that in its network of over 1,000 publishers, style and fashion photos were tagged with advertising 20,000 times. Images of food were tagged 16,000 times and photos of chocolate 14,000. Even veggies were tagged 9,000 times. As for kittens and other pets, they’re nowhere to be found.

New York based PopMarker has developed a patent-pending image tagging advertising platform that allows publishers to monetize images by overlaying additional content and links on top of an existing image.

“Publishers can take images that they already own and create a new stream of revenue by using them to create programmatic advertising,” says PopMarker CEO Sarper Kocabiyik. “For publishers it’s found money since they can monetize an existing library of images that sits idle.”

The opportunity to make use of images that they already owned not only creates new revenues for publishers, but also has been found to be more effective than what they’re already using. In just 21 months of operation PopMarker has found that programmatic publishing yields three times more revenue as more traditional banner ads. In addition, fill rate for qualified and compliant publishers is close to 100% at a very competitive eCPM.

PopMarker enables publishers to generate an entirely new source of revenue by using photos they already own. The initial data confirm that publishers believe that there’s likely to be gold in those archived photos of bread and chocolate – not kittens. Cute kittens may be the stars of social media, but cute only gets you so far. 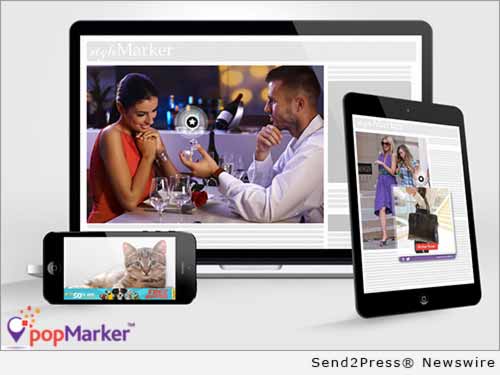 NEWS ARCHIVE NOTE: this archival news content, issued by the news source via Send2Press Newswire, was originally located in the Send2Press® 2004-2015 2.0 news platform and has been permanently converted/moved (and redirected) into our 3.0 platform. Also note the story “reads” counter (bottom of page) does not include any data prior to Oct. 30, 2016. This press release was originally published/issued: Tue, 10 Nov 2015 02:00:00 +0000

View More Advertising and Marketing News
"Publishers can take images that they already own and create a new stream of revenue by using them to create programmatic advertising," says PopMarker CEO Sarper Kocabiyik.

ABOUT THE NEWS SOURCE:
PopMarker Inc.

LEGAL NOTICE AND TERMS OF USE: The content of the above press release was provided by the “news source” PopMarker Inc. or authorized agency, who is solely responsible for its accuracy. Send2Press® is the originating wire service for this story and content is Copr. © PopMarker Inc. with newswire version Copr. © 2015 Send2Press (a service of Neotrope). All trademarks acknowledged. Information is believed accurate, as provided by news source or authorized agency, however is not guaranteed, and you assume all risk for use of any information found herein/hereupon.