"All of Eagle Transport congratulates Darryl, and celebrates his continued commitment to safety and excellence. We are VERY PROUD to have someone as professional and caring as Darryl to be part of the Eagle family," said Ron Thomas, Eagle Transport.

ROCKY MOUNT, N.C., May 3, 2016 (SEND2PRESS NEWSWIRE) — It is a great privilege for Eagle Transport Corporation to announce Darryl Nowell as the “Professional Tank Truck Driver of the Year – Grand Champion” for 2015-2016. The prestigious award was announced on April 25, 2016 at the National Tank Truck Carrier’s Annual Conference in San Diego, Calif. This honor exemplifies Darryl’s incomparable trucking career.

Darryl’s career in transportation spans over 31 years including 13 years with Eagle, working out of the Richmond, Va. Terminal. He is a “President’s Million Mile Club” member and a Certified Trainer for Eagle. His sense of pride and energy toward error-free work compel him to be a constant mentor and source of knowledge to other drivers within the company.

Darryl is very involved in local Tidewater Virginia activities, and has some very interesting hobbies: He’s an Army veteran, a Boy Scout Leader, a Little League football and baseball coach, a Search & Rescue Coast Guard Volunteer, a community advocate for fire prevention — and most distinctive of all, a Professional Wrestler in the persona of “Pyro the Human Incinerator” complete with flaming fingertips! Needless to say he has a very BIG personality!!

“All of Eagle Transport congratulates Darryl, and celebrates his continued commitment to safety and excellence. We are VERY PROUD to have someone as professional and caring as Darryl to be part of the Eagle family,” said Ron Thomas, VP Human Resources, Eagle Transport. 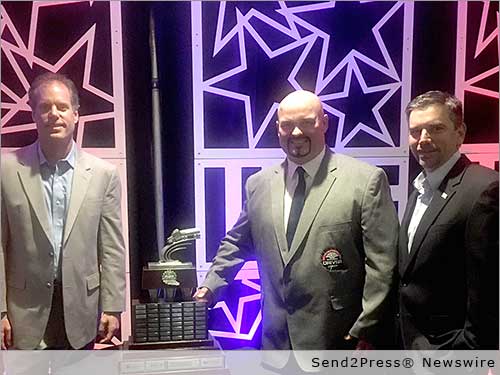 NEWS ARCHIVE NOTE: this archival news content, issued by the news source via Send2Press Newswire, was originally located in the Send2Press® 2004-2015 2.0 news platform and has been permanently converted/moved (and redirected) into our 3.0 platform. Also note the story “reads” counter (bottom of page) does not include any data prior to Oct. 30, 2016. This press release was originally published/issued: Tue, 03 May 2016 07:00:36 +0000

View More Awards and Honors News
"All of Eagle Transport congratulates Darryl, and celebrates his continued commitment to safety and excellence. We are VERY PROUD to have someone as professional and caring as Darryl to be part of the Eagle family," said Ron Thomas, Eagle Transport.

LEGAL NOTICE AND TERMS OF USE: The content of the above press release was provided by the “news source” Eagle Transport Corp or authorized agency, who is solely responsible for its accuracy. Send2Press® is the originating wire service for this story and content is Copr. © Eagle Transport Corp with newswire version Copr. © 2016 Send2Press (a service of Neotrope). All trademarks acknowledged. Information is believed accurate, as provided by news source or authorized agency, however is not guaranteed, and you assume all risk for use of any information found herein/hereupon.