John Amrhein, Jr. says that "there probably would not have been a 'Treasure Island' for Mr. Stevenson if not for the miracle that happened on December 4, 1749, the feast day of St. Barbara."

Santa Barbara, California, was named after a 4th century woman who was beheaded by her own father after she converted to Christianity. Since then, many miracles have been attributed to her. She is known as the patron saint of artillerymen or anyone who works with cannon or explosives. The Spanish used to call their gunpowder rooms on board ship the “Santa Barbara” after her. She is also patron of those in danger of sudden death as in a tempest. She is a frequent ornament on shields, armor, and large cannon.

Santa Barbara, Calif., received its name from the conquistador, Sebastian Vizcaino, who in 1602 encountered a terrible storm on December 3, the eve of St. Barbara’s feast day, while exploring the region what is now known as Santa Barbara. The Franciscan mission of that name was later founded by Padre Fermin Lasuen on December 4, 1786, the feast day of St. Barbara. This was the tenth mission to be founded, the first nine attributed to Father Junipero Serra, known as the Apostle of California. Father Serra was ordered to this area in 1782 with the goal of establishing his tenth mission here. He raised the cross and constructed the presidio but was ordered away before he could begin construction of his next mission. He died in 1784 without realizing his goal.

Father Serra and St. Barbara had would might be called a chance meeting in 1749. Father Serra was traveling from Spain to Veracruz aboard the galleon, Nuestra Senora de Guadalupe, when the ship was hit by a storm just off Veracruz and was blown off course. Then, a hurricane befell the hapless galleon driving the crew to despair. On December 4, Father Serra assembled the other priests travelling with him and they drew lots for patrons to pray to for physical salvation. St. Barbara was coincidentally selected, and all the priests prayed in unison to the virgin martyr, “Long live Santa Barbara.” The raging seas became calm as the wind suddenly died. The life was spared for the priest who would found the first nine missions of California.

The galleon, Nuestra Senora de Guadalupe, had her own appointment with destiny. The following year she was driven by hurricane to the coast of North Carolina carrying a fortune in treasure. It seemed at first that good fortune was at hand for her captain and crew because she was towed safe into Ocracoke Inlet, the same harbor where Blackbeard was killed in 1718. But, what could only be called a historic reversal, her treasure was stolen by a Captain Owen Lloyd and his peg-legged brother, John. The treasure was buried in the Caribbean but was soon recovered and found its way into the hands of crooked colonial governors. Robert Louis Stevenson memorialized the event with his treasure map dated 1750 that would lead Jim Hawkins and Long John Silver to return to retrieve the treasure that, in real life, had been buried by Owen Lloyd.

Just before Stevenson wrote “Treasure Island,” he visited Father Serra’s burial place in Carmel, California in 1879. He made a plea in the local paper for donations to preserve Father Serra’s favorite mission. Stevenson died when he was forty-four leaving his widow, Fanny, who ultimately returned to California and settled in Santa Barbara in 1908, an idyllic spot described by her sister, Nellie, as “perhaps the loveliest spot on the peaceful shore of the sunset sea, under the patronage of the noble lady, Saint Barbara.” Fanny Stevenson died there on February 18, 1914.

Amrhein says that “there probably would not have been a ‘Treasure Island’ for Mr. Stevenson if not for the miracle that happened on December 4, 1749, the feast day of St. Barbara.”

More on the 1750 Spanish fleet can be found at http://www.thehiddengalleon.com/ and http://www.treasureislandtheuntoldstory.com/. 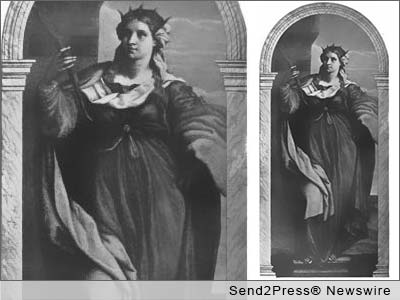 NEWS ARCHIVE NOTE: this archival news content, issued by the news source via Send2Press Newswire, was originally located in the Send2Press® 2004-2015 2.0 news platform and has been permanently converted/moved (and redirected) into our 3.0 platform. Also note the story “reads” counter (bottom of page) does not include any data prior to Oct. 30, 2016. This press release was originally published/issued: Tue, 03 Dec 2013 16:04:27 +0000

View More Books and Publishing News
John Amrhein, Jr. says that "there probably would not have been a 'Treasure Island' for Mr. Stevenson if not for the miracle that happened on December 4, 1749, the feast day of St. Barbara."