"We decided on the name UGLY by nature because of the product's silvery-gray appearance - our signature color," Dr. Paul Herman, UGLY by nature's CEO, says.

FORT LAUDERDALE, Fla., Oct. 9, 2015 (SEND2PRESS NEWSWIRE) — UGLY by nature, a chemical and fluoride-free toothpaste, is getting attention from its reviewers. Some say they’re “obsessed with it” and others are simply “blown away.” Doctor-formulated, it’s made with fair trade organic coconut oil and contains only natural and organic ingredients that were chosen for optimal oral health; nothing artificial is added.

Dr. Steve Shoshany, a New York doctor seen on “The Doctors” (www.drshoshany.com), says, “I love this toothpaste! Non-fluoridated all natural. This toothpaste leaves my mouth feeling clean and not medicated. I have been using Tom’s but have made the switch to UGLY by nature.”

Dr. Paul Herman, UGLY by nature’s CEO and a Florida-based physician, has treated patients holistically for almost 20 years. When childhood friend, Adriana Ryan, president and co-founder of UGLY by nature, mentioned that her son suffered from allergies and had allergic reactions to toothpastes, Dr. Herman decided to create one for him.

After using the toothpaste, the child’s allergic reactions stopped. That initial formula has since evolved to 10, all-natural and organic ingredients which, among others, include: organic coconut oil, non-GMO xylitol, coconut-activated charcoal and aloe barbadensis leaf juice.

“I’m thrilled to offer a healthier alternative to what is currently available worldwide,” he says. “This toothpaste has generated such excitement and anticipation. We’ve given samples to friends, family and social media followers; they kept asking for more and wanted to know if we’d be selling it. That’s how UGLY by nature was born.”

On September 30, UGLY by nature launched an Indiegogo crowdfunding campaign that will run through November 1, 2015. Campaign contributors can earn perks, prizes and even a vacation. The financial goal is $26,000 and money raised will help with production and distribution.

“We decided on the name UGLY by nature because of the product’s silvery-gray appearance – our signature color,” Herman says.

Currently, UGLY by nature toothpaste is offered in seven flavors. All products are certified Vegan, cruelty-free and non-GMO.

To view a video: https://youtu.be/I-v6nWWZjkU.

News issued by: UGLY by nature 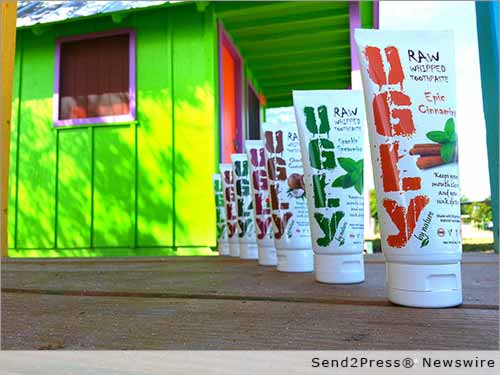 NEWS ARCHIVE NOTE: this archival news content, issued by the news source via Send2Press Newswire, was originally located in the Send2Press® 2004-2015 2.0 news platform and has been permanently converted/moved (and redirected) into our 3.0 platform. Also note the story “reads” counter (bottom of page) does not include any data prior to Oct. 30, 2016. This press release was originally published/issued: Fri, 09 Oct 2015 17:53:16 +0000

View More Dentistry News
"We decided on the name UGLY by nature because of the product's silvery-gray appearance - our signature color," Dr. Paul Herman, UGLY by nature's CEO, says.

More from UGLY by nature

ABOUT THE NEWS SOURCE:
UGLY by nature

LEGAL NOTICE AND TERMS OF USE: The content of the above press release was provided by the “news source” UGLY by nature or authorized agency, who is solely responsible for its accuracy. Send2Press® is the originating wire service for this story and content is Copr. © UGLY by nature with newswire version Copr. © 2015 Send2Press (a service of Neotrope). All trademarks acknowledged. Information is believed accurate, as provided by news source or authorized agency, however is not guaranteed, and you assume all risk for use of any information found herein/hereupon.