"'SCRATCH' is meta-theater. It's also an update on classic found footage films like 'The Blair Witch Project.' It's a 'found phone' feature. Cinema verite-style, but not taking itself too seriously," says Director and Producer Tristan Convert.

LOS ANGELES, Calif., March 22, 2016 (SEND2PRESS NEWSWIRE) — After directing over a dozen short films, French filmmaker Tristan Convert announced he has directed his first feature, “SCRATCH,” an original horror comedy starring Daniele Watts (“Django Unchained”), for which he has launched an Indiegogo campaign, to reach $10k for finishing funds. Set in Los Angeles’s known-to-be haunted Old Zoo, “SCRATCH” is one of the first, if not the first, found footage films shot entirely on iPhone 6.

“SCRATCH” tells the story of two would-be filmmakers who decide to shoot a music video for a local nu metal band on an iPhone at an abandoned zoo. A recipe for disaster. Watts plays Samantha Steel, the “goth rock diva” and lead singer of the band.

“‘SCRATCH’ is meta-theater. It’s also an update on classic found footage films like ‘The Blair Witch Project.’ It’s a ‘found phone’ feature. Cinema verite-style, but not taking itself too seriously,” says Director and Producer Tristan Convert. “The audience will see what the filmmakers’ crew in the movie is shooting from the point-of-view of their iPhones. The handheld, POV-style frame will be intimate, close to the characters, swirling, falling, selfie-ing, complete with texts and IOS updates interrupting the shoot,” he adds.

Convert created “SCRATCH” as a unique take on an American black horror comedy. Throughout the film, one by one, the members of the cast and crew are scratched by an infected person, which causes them to transform into their primal, savage selves succumbing to their basic instincts. “SCRATCH” is a classic contagion story; e.g., the werewolf myth, but the infected persons are not zombies. In fact, the savages are not evil at all. They simply crave sex and food. However, they lack the ability to control their impulses, and therein lies the conflict.

“At its core, ‘SCRATCH’ is about our struggle to contain the beast within,” Convert explains. “SCRATCH” explores key themes like: What differentiates us from animals? And what does it mean to be truly free?

“SCRATCH” is currently in post-production, for which Convert has launched a fundraising campaign on Indiegogo to raise $10,000 to be used for color correction, sound mixing, and securing music rights.

About Tristan Convert:
Convert is a French filmmaker. During his studies at The University of Science and Technology in Lille, France, he focused on radical filmmaking. In Paris, he worked on feature films and documentary production. Based on his early projects, Convert received several grants to study cinema at Pictanovo and The European Center for Film Production (CEFPF). His last short film, “Le Chat Noir” (“The Black Cat”), was premiered at the Hollyshorts Film Festival, won Best Short Film at the Black Earth Festival, was a distinguished finalist at the Generation Court Film Festival, and was an official selection at the San Francisco Shorts, New York Chashama Film Festival, Nevada City Film Festival, and Arizona Underground. Subsequently, at Eli Roth’s suggestion, Convert moved to the United States and settled in Los Angeles to prepare “SCRATCH.” Learn more: http://www.tristanconvert.com/.

About Akilah Green:
After spending almost a decade practicing as a lawyer-lobbyist on Washington, D.C.’s infamous “K Street,” Akilah moved to Los Angeles to pursue a career in screen writing. Akilah currently works full-time generating and pitching funny stories, segments, and beats for Chelsea Handler’s upcoming Netflix talk show, “Chelsea.” As well, she consults for “Real Time with Bill Maher” on HBO and is a weekly columnist for “The Root.” Akilah has a Bachelors from the University of Texas at Austin and a Juris Doctor from the University of Michigan. In addition to co-writing and producing “SCRATCH,” Akilah has written a number of television pilots for development. Learn more: http://akilahgreen.com/.

About Sebastien Bizeul:
Sebastien Bizeul has been an actor and co-director in the Frozen Zebras troupe in Delhi, India for several years where he has been involved in plays such as “No Exit” from Jean-Paul Sartre and Art from Yasmina Reza. He directed comedies at the French Embassy School of Delhi where he also taught theater for many years. Before that, he produced short films and computer graphic movies. He also wrote a satirical action novel, “As Soon As,” about an anti-hero discovering a world conspiracy. After traveling the globe, most extensively in Asia and Africa, Bizeul has recently settled in L.A. Learn more: https://www.facebook.com/sebastien.bisoeil.

Find out more about “SCRATCH” at: 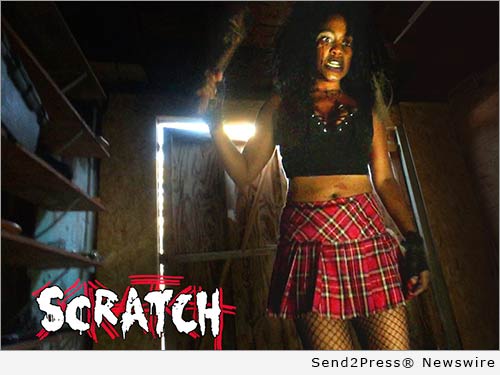 NEWS ARCHIVE NOTE: this archival news content, issued by the news source via Send2Press Newswire, was originally located in the Send2Press® 2004-2015 2.0 news platform and has been permanently converted/moved (and redirected) into our 3.0 platform. Also note the story “reads” counter (bottom of page) does not include any data prior to Oct. 30, 2016. This press release was originally published/issued: Tue, 22 Mar 2016 15:14:10 +0000

View More Business News
"'SCRATCH' is meta-theater. It's also an update on classic found footage films like 'The Blair Witch Project.' It's a 'found phone' feature. Cinema verite-style, but not taking itself too seriously," says Director and Producer Tristan Convert.

ABOUT THE NEWS SOURCE:
Tristan Convert

LEGAL NOTICE AND TERMS OF USE: The content of the above press release was provided by the “news source” Tristan Convert or authorized agency, who is solely responsible for its accuracy. Send2Press® is the originating wire service for this story and content is Copr. © Tristan Convert with newswire version Copr. © 2016 Send2Press (a service of Neotrope). All trademarks acknowledged. Information is believed accurate, as provided by news source or authorized agency, however is not guaranteed, and you assume all risk for use of any information found herein/hereupon.