LONDON, U.K., Oct. 9, 2014 (SEND2PRESS NEWSWIRE) — Replikins Global Surveillance System™ analysis of the Ebola virus show the highest ever peaks in Ebola Gene Replikin Counts in the years 2012 and 2013. Such genomic increases predicted the current worst ever Ebola outbreak. A recent sudden drop in the Replikin Counts may signal an early end to the current outbreak if adequate public health measures are implemented for containment of Ebola virus already in human hosts. (See Figure.)

The earliest possible submission of specimens from initial cases for Replikins analysis of gene sequences will increase the time available for implementing an accurate, safe, and effective response. Slow response to the current Ebola outbreak has been devastating. Knowledge of the Ebola Replikin Count increase in 2012 and 2013 would have given governments one to two years to implement public health measures and test vaccine candidates earlier.

The Replikins Global Surveillance system tracks the concentration of specific gene sequences in the infectious organism, named Replikins, which are associated with rapid replication and population expansion of pathogens. A quantitative increase in the concentration of the Replikin sequences in the gene signals an outbreak. Outbreaks have followed when the Replikin Count increase reaches a statistically significant level of p<0.001. Monitoring of Replikin counts during outbreaks provides further useful data regarding course and termination of virus and bacterial pathogenic activity.

Replikins Ebola Surveillance:
Ebola sequences in the Pubmed database were analyzed retrospectively to 1976 when Ebola was first described, and prospectively, after the current outbreak was reported in the first months of 2014. Five separate independent automated Replikins analyses were performed on all Ebola strains combined (N=10,197), on each separate strain, and on several individual Ebola proteins. The same result of a rise in count to a 2012-2013 peak at p<0.001 was found in all five analyses. Such sharp increase in the results of all five analyses also directly correlates with current epidemiologic data reporting the worst Ebola outbreak recorded. In two Ebola proteins the Replikins count warning came two years in advance, in 2012, and if known then, could have resulted in preparatory action.

Post outbreak prospective analysis has shown that instead of an elevated Count persisting after the outbreak, as it did in the H1N1 pandemic (*see references), the Replikin Count of Ebola has precipitously dropped during 2014 to its pre-outbreak levels, similar to the Replikin count progression in the SARS outbreak of 2003. The recent drop in Replikin Count in the Ebola genome signals an earlier end to the current outbreak than estimated, if required public health containment measures are implemented against the Ebola viruses already in human hosts. The SARS outbreak of 2002-2003 was over in less than one year. However, in SARS 2003, excellent intensive public health containment efforts were implemented immediately. Such containment has not yet been achieved with Ebola.

The recent sharp drop in the Ebola gene Replikin Count suggests that the gene reservoir for rapid replication has declined in both animal and human hosts. Quarantine and travel restrictions should be strengthened against those Ebola viruses that have already entered human hosts, to end the present Ebola outbreak sooner.

The data in this release has been submitted for peer-reviewed publication, and will be presented at Boston University School of Medicine on October 14, 2014. 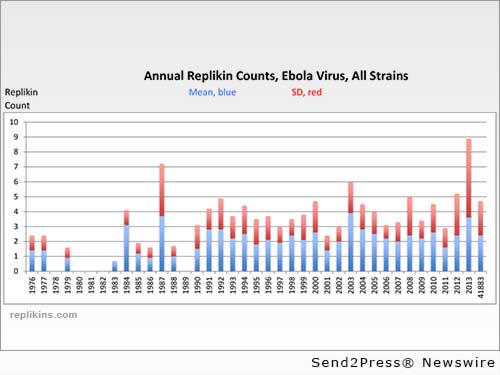 NEWS ARCHIVE NOTE: this archival news content, issued by the news source via Send2Press Newswire, was originally located in the Send2Press® 2004-2015 2.0 news platform and has been permanently converted/moved (and redirected) into our 3.0 platform. Also note the story “reads” counter (bottom of page) does not include any data prior to Oct. 30, 2016. This press release was originally published/issued: Thu, 09 Oct 2014 14:47:23 +0000

LEGAL NOTICE AND TERMS OF USE: The content of the above press release was provided by the “news source” Replikins Global Surveillance System or authorized agency, who is solely responsible for its accuracy. Send2Press® is the originating wire service for this story and content is Copr. © Replikins Global Surveillance System with newswire version Copr. © 2014 Send2Press (a service of Neotrope). All trademarks acknowledged. Information is believed accurate, as provided by news source or authorized agency, however is not guaranteed, and you assume all risk for use of any information found herein/hereupon.