"The perspective I'd gained as a business owner resulted in my understanding of the need for measurable business growth strategies," says Roger Stalheim.

DES MOINES, Iowa, Sept. 17, 2015 (SEND2PRESS NEWSWIRE) — At the end of the day, all business professionals, from C-level Executives to hourly employees alike, are driven by recognition and accolades as much as income and profit. When it comes to being recognized as a “leader in your industry,” there’s no better testament than those from your peers, and Roger Stalheim, President of The Des Moines Metro Alternative Board (TAB) can attest to that.

At the Alternative Board International Convention, held in Colorado this August, it was announced that Stalheim’s Des Moines Metro TAB franchise had advanced to 12th out of approximately 300 International franchises in the network. This equates to being held in the top 4 percent of the largest and most progressive Professional Business Coaches network around the World. For Stalheim, though, the recognition comes as an aside to the path that brought him there.

A consummate entrepreneur, Roger Stalheim has started and operated numerous successful businesses over his quarter-of-a-century career. From an automotive dealership to home construction and contractor services and on to an Insurance career that saw him bring a fledgling firm from obscurity to quickly profiting millions; Roger’s business acumen delivered time after time. But his success would have been less of a story if it weren’t for his own involvement in The Alternative Board (TAB) as a client.

In 2008, Roger connected with TAB out of Colorado to help develop strategic growth strategies and position his business for valuation and eventual purchase. Through the coaching and valuation processes he experienced, his desire to use this knowledge to become an advocate for other businesses became apparent. So, in 2012, after the successful sale of his own business, Roger earned his professional Business Coach certification and established the Des Moines Metro Alternative Board.

In the three years since establishing the Des Moines Metro franchise for TAB, Roger has grown his consultancy to a clientele of over 30 businesses, focusing on strategic planning, leadership training and management, business valuation and assessments, as well as helping business owners with work-life balance and personal advancement.

As Roger reflected on the award and the steps needed to continue his own success, he said, “The perspective I’d gained as a business owner resulted in my understanding of the need for measurable business growth strategies. As a Business Coach, this award simply shows the marriage of expertise and drive will continue to help local business owners who’ve ‘hit a ceiling,’ and are looking for the next step.”

Photo caption: Roger Stalheim of Des Moines Metro Alternative Board was internationally recognized in the Top 4 percent for Business Advisors. 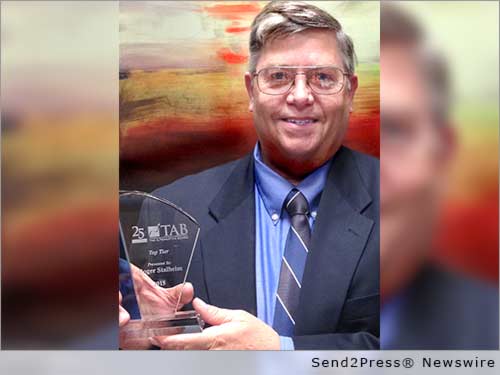 NEWS ARCHIVE NOTE: this archival news content, issued by the news source via Send2Press Newswire, was originally located in the Send2Press® 2004-2015 2.0 news platform and has been permanently converted/moved (and redirected) into our 3.0 platform. Also note the story “reads” counter (bottom of page) does not include any data prior to Oct. 30, 2016. This press release was originally published/issued: Thu, 17 Sep 2015 14:51:02 +0000

View More Awards and Honors News
"The perspective I'd gained as a business owner resulted in my understanding of the need for measurable business growth strategies," says Roger Stalheim.

ABOUT THE NEWS SOURCE:
Roger Stalheim

LEGAL NOTICE AND TERMS OF USE: The content of the above press release was provided by the “news source” Roger Stalheim or authorized agency, who is solely responsible for its accuracy. Send2Press® is the originating wire service for this story and content is Copr. © Roger Stalheim with newswire version Copr. © 2015 Send2Press (a service of Neotrope). All trademarks acknowledged. Information is believed accurate, as provided by news source or authorized agency, however is not guaranteed, and you assume all risk for use of any information found herein/hereupon.