Bill George, Eagle's President stated "This investment in our most important asset, human capital, shows the ongoing commitment we have for our Eagle team members."

ROCKY MOUNT, N.C., Aug. 7, 2014 (SEND2PRESS NEWSWIRE) — Eagle Transport, one of the largest and most progressive petroleum and bulk transportation companies in the U.S., is pleased to announce a company-wide driver pay increase, effective August 3, 2014. The overall impact of this increase will be 5.5 percent, with many locations in the Eagle system seeing larger increases based on the specific needs of the operation.

Since 2012, Eagle has worked hard to position the company for growth over the next 10 year. Large investments into equipment and facilities means Eagle has one of the newest and best-maintained fleets in the industry. The next logical step was to insure the pay structure of our professional driver fleet was addressed.

Eagle’s driver pay structure is based on trip pay, and has several layers of incentives built in. Each terminal location was examined individually to ascertain the correct improvement in load lanes, whether they be short, medium or long. The result was a specific, targeted approach by terminal, not a “one size fits all” solution.

Since early July, the corporate management team has been visiting every Eagle terminal to personally share the pay increase information with as many employees as possible, and spend time with the professional drivers in each of Eagle’s 22 terminal locations.

Bill George, Eagle’s President stated “This investment in our most important asset, human capital, shows the ongoing commitment we have for our Eagle team members.” 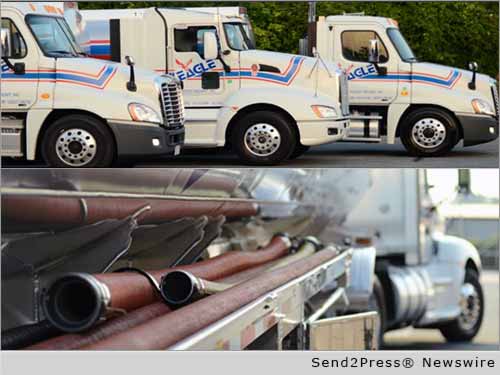 NEWS ARCHIVE NOTE: this archival news content, issued by the news source via Send2Press Newswire, was originally located in the Send2Press® 2004-2015 2.0 news platform and has been permanently converted/moved (and redirected) into our 3.0 platform. Also note the story “reads” counter (bottom of page) does not include any data prior to Oct. 30, 2016. This press release was originally published/issued: Thu, 07 Aug 2014 13:10:31 +0000

View More Business News
Bill George, Eagle's President stated "This investment in our most important asset, human capital, shows the ongoing commitment we have for our Eagle team members."

LEGAL NOTICE AND TERMS OF USE: The content of the above press release was provided by the “news source” Eagle Transport Corp or authorized agency, who is solely responsible for its accuracy. Send2Press® is the originating wire service for this story and content is Copr. © Eagle Transport Corp with newswire version Copr. © 2014 Send2Press (a service of Neotrope). All trademarks acknowledged. Information is believed accurate, as provided by news source or authorized agency, however is not guaranteed, and you assume all risk for use of any information found herein/hereupon.