"Bathroom and kitchen remodels remain the most popular improvements homeowners intend to make this year, but in stark contrast to previous years, the number of other rooms that homeowners plan to add or remodel has grown significantly," said Dan Fritschen, principal report author.

SUNNYVALE, Calif., Feb. 11, 2015 (SEND2PRESS NEWSWIRE) — The latest US Remodeling Sentiment Report from Remodel or Move (remodelormove.com) indicated that the continued economic recovery has favorably affected homeowners. Homeowner respondents report their average home equity is now over $165,000, up from $115,000 in 2013, which combined with continued low interest rates and pent-up demand for home repair and improvements, is fueling growth.

“Bathroom and kitchen remodels remain the most popular improvements homeowners intend to make this year, but in stark contrast to previous years, the number of other rooms that homeowners plan to add or remodel has grown significantly,” said Dan Fritschen, principal report author at remodelormove.com.

“The dramatic increase in home equity and consumer confidence combined with the projects that homeowners postponed during the recession has fueled a move toward remodels and home additions that are of larger scope and scale than in past years.”

Even with the significant increase in the size of remodels – the DIY spirit is strong with close to 60% of homeowners planning to do some of the remodeling work themselves. The increase in home equity creates a wealth affect that drives the percent of homeowners who report they will use expensive materials up to 23% of respondents from a low of 10% in 2010 at the depths of the recession.

First published in 2005, the US Remodeling Sentiment Report is published by the popular website remodelormove.com. The report has 10 years of data containing millions of data points from U.S. homeowners, which are used to document and project homeowners remodeling preferences.

http://www.remodelormove.com/ has provided the information homeowners need to make savvy remodeling and moving decisions, reduce stress and get more for the money they invest in – remodeling their current home or moving to a home that better meets their needs. 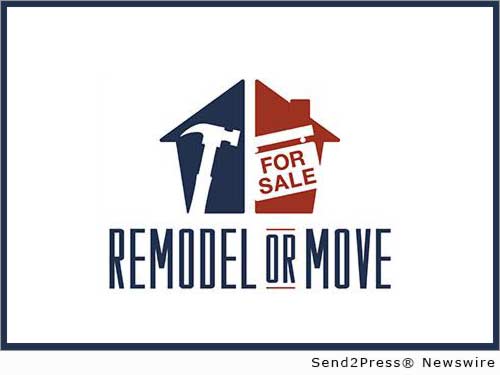 NEWS ARCHIVE NOTE: this archival news content, issued by the news source via Send2Press Newswire, was originally located in the Send2Press® 2004-2015 2.0 news platform and has been permanently converted/moved (and redirected) into our 3.0 platform. Also note the story “reads” counter (bottom of page) does not include any data prior to Oct. 30, 2016. This press release was originally published/issued: Wed, 11 Feb 2015 16:08:34 +0000

View More Business News
"Bathroom and kitchen remodels remain the most popular improvements homeowners intend to make this year, but in stark contrast to previous years, the number of other rooms that homeowners plan to add or remodel has grown significantly," said Dan Fritschen, principal report author.

LEGAL NOTICE AND TERMS OF USE: The content of the above press release was provided by the “news source” ABCD Publishing LLC or authorized agency, who is solely responsible for its accuracy. Send2Press® is the originating wire service for this story and content is Copr. © ABCD Publishing LLC with newswire version Copr. © 2015 Send2Press (a service of Neotrope). All trademarks acknowledged. Information is believed accurate, as provided by news source or authorized agency, however is not guaranteed, and you assume all risk for use of any information found herein/hereupon.