TIPP CITY, Ohio, May 14, 2014 (SEND2PRESS NEWSWIRE) — Award-winning educator and writer Eric A. Combs, debuts an ambitious and eye-opening book, “Mission Critical” (ISBN: 978-1-940876-06-1), a non-fiction title encompassing his thoughts and experiences of the American public school system. What makes this book so unique is Combs’ ability to share his experience of being a USAF Senior Master Sergeant and explain how it shapes and relates to his work within the realm of education.

Combs spent 20 years in the Air Force serving as a Security Forces Superintendent and special tactics instructor. During his tenure in the military he served all over the globe, including Asia, Europe, North Africa and even the Middle East. In 1992 he was the Non-commissioned Officer of the Year in Europe. However, his accolades didn’t stop there. He switched roles from being an Airmen to an educator eventually being named the 2006 Ohio Teacher of the Year.

Published by Foxhead Books, Mission Critical touches on many facets of the public schooling system in the United States. Combs bluntly states his frustrations with public schooling and what is and isn’t working. In the book, Combs uses his own personal experiences to tell of successes and failures.

He then relates these stories back to the failing American public school system and then finally prescribes ways on how to dramatically change it for the better. Combs compliments the hard-working teachers, parents and administration who don’t receive much recognition for their role in propelling students to care about their education.

The difficulties Combs faced during his time in the USAF not only prepared him for his challenging career as an educator in public schools but also gave him an unique perspective that many aren’t equipped to carry.

To find out more about Eric Combs and his unyielding new book, Mission Critical visit http://ericcombs.com/.

In “Mission Critical” (ISBN: 978-1-940876-06-1) Combs solutions for a dangerously broken American public school system barely held together by hard-working teachers, parents and administrators. First as a Senior Master Sergeant in the U.S. Air Force and then as a teacher and school administrator, Combs discovered that much of what he learned serving in the military translated into very real instructional methods and tactics within the classroom.

News issued by: Eric A. Combs 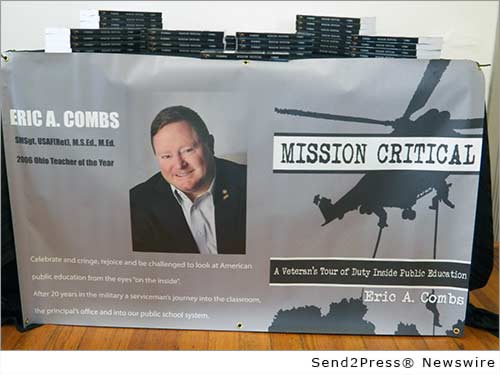 NEWS ARCHIVE NOTE: this archival news content, issued by the news source via Send2Press Newswire, was originally located in the Send2Press® 2004-2015 2.0 news platform and has been permanently converted/moved (and redirected) into our 3.0 platform. Also note the story “reads” counter (bottom of page) does not include any data prior to Oct. 30, 2016. This press release was originally published/issued: Wed, 14 May 2014 08:01:00 +0000

More from Eric A. Combs

ABOUT THE NEWS SOURCE:
Eric A. Combs

LEGAL NOTICE AND TERMS OF USE: The content of the above press release was provided by the “news source” Eric A. Combs or authorized agency, who is solely responsible for its accuracy. Send2Press® is the originating wire service for this story and content is Copr. © Eric A. Combs with newswire version Copr. © 2014 Send2Press (a service of Neotrope). All trademarks acknowledged. Information is believed accurate, as provided by news source or authorized agency, however is not guaranteed, and you assume all risk for use of any information found herein/hereupon.