Leigh says, "The Amateur Pole Art Showcase is like music's version of an open mic night. On one hand, it gives women an opportunity to apply what they learn in pole class before a live audience. Some are performing for the first time ever in front of people.

LOS ANGELES, Calif., Oct. 15, 2014 (SEND2PRESS NEWSWIRE) — Everyday women will prove that the sport of pole dancing is no longer just for strippers when they take the stage, in costume, at a historical bikini bar on Sunday, October 26 during Amanda Leigh’s Amateur Pole Art Showcase Pre-Halloween Party. Held at the World Famous Cheetahs Club Hollywood, show time begins at 8 p.m. and doors open at 7:30 p.m.

Tickets are $12 at the door. Cheetahs is located at 4600 Hollywood Blvd. in Los Angeles. Final year-end dates include Sunday, November 2 and Sunday, December 7, 2014, with more dates to be announced for 2015.

Leigh, a pole dancing student and successful entrepreneur, has been producing and hosting the Amateur Pole Art Showcase for the past year. Many of the performers are doctors, lawyers, executives, teachers and mothers who take pole classes for exercise and self-empowerment. Due to the popularity of the event, it is held once, sometimes twice monthly due to a consistent standing room only reception!

Leigh says, “The Amateur Pole Art Showcase is like music’s version of an open mic night. On one hand, it gives women an opportunity to apply what they learn in pole class before a live audience. Some are performing for the first time ever in front of people. On the other hand, it gives women the opportunity to live out their fantasy of dancing at a strip club. Performers can have that experience in a safe and supportive way because the audience is full of friends and family members, both male and female, cheering them on and tossing money on the stage, as they express themselves through an amazing mix of art, athleticism, and sometimes erotica.”

Amanda’s own personal pole dance journey led her on a mission to empower women. A former anorexic and food addict, she found that even after years of medical treatment and other self-help modalities that cured her food issue, she couldn’t fully recover from body dysmorphic disorder. Pole dance lessons taught her to love and appreciate herself and her body in new ways. An avid pole dance enthusiast now, her Amateur Pole Art Showcase serves to bring the art of pole dance to a broader audience.

“The Amateur Pole Art Showcase is bringing pole dance as an art and sport into the mainstream,” Leigh says. “There is still an association with stripping when you say that you pole dance. There is nothing wrong with stripping. It’s a job. We are pole dancers though. Many people don’t know that pole dance is a sport and an art like gymnastics or ice-skating. I put my showcase in a venue where women typically strip so people can see the difference. Yes, it is hard for some people to conceive, but I guarantee you that when they come to the showcase they will completely understand. ” 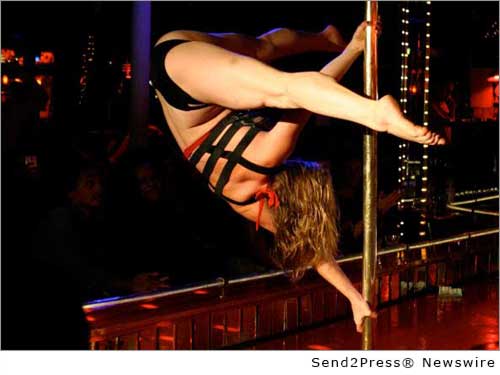 Alternate Headline: Everyday women will prove that the sport of pole dancing is no longer just for strippers

NEWS ARCHIVE NOTE: this archival news content, issued by the news source via Send2Press Newswire, was originally located in the Send2Press® 2004-2015 2.0 news platform and has been permanently converted/moved (and redirected) into our 3.0 platform. Also note the story “reads” counter (bottom of page) does not include any data prior to Oct. 30, 2016. This press release was originally published/issued: Wed, 15 Oct 2014 20:19:23 +0000

View More California Business News
Leigh says, "The Amateur Pole Art Showcase is like music's version of an open mic night. On one hand, it gives women an opportunity to apply what they learn in pole class before a live audience. Some are performing for the first time ever in front of people.

ABOUT THE NEWS SOURCE:
Amanda Leigh

LEGAL NOTICE AND TERMS OF USE: The content of the above press release was provided by the “news source” Amanda Leigh or authorized agency, who is solely responsible for its accuracy. Send2Press® is the originating wire service for this story and content is Copr. © Amanda Leigh with newswire version Copr. © 2014 Send2Press (a service of Neotrope). All trademarks acknowledged. Information is believed accurate, as provided by news source or authorized agency, however is not guaranteed, and you assume all risk for use of any information found herein/hereupon.