It crackles with urgency, as three warriors, Jack McKeane, Ali Sattar, and Alex Mahgoub – Crusades-era Muslim and Christian and modern-era GI from the Iraq conflict – battle at the very door of Heaven. Will they enter the gates of Heaven?

Expert stage fighting punctuates this debate about love, war and the role of God in the fight for a good life. Directed by Cheryl King, Stage Left, N.Y. and produced by Cynthia Keane.

13th Street Repertory Company was voted the Best Off-Off Broadway Company to act with in New York City by Backstage: The Best of New York. 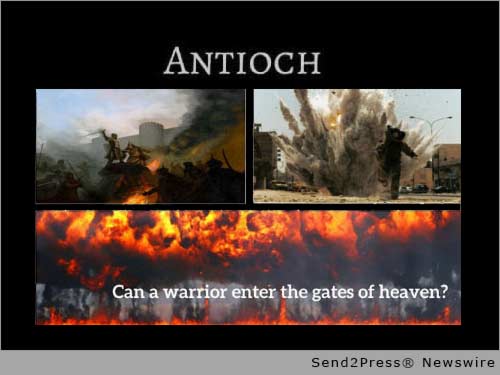 NEWS ARCHIVE NOTE: this archival news content, issued by the news source via Send2Press Newswire, was originally located in the Send2Press® 2004-2015 2.0 news platform and has been permanently converted/moved (and redirected) into our 3.0 platform. Also note the story “reads” counter (bottom of page) does not include any data prior to Oct. 30, 2016. This press release was originally published/issued: Wed, 21 Jan 2015 07:00:01 +0000

LEGAL NOTICE AND TERMS OF USE: The content of the above press release was provided by the “news source” 13th Street Repertory Company or authorized agency, who is solely responsible for its accuracy. Send2Press® is the originating wire service for this story and content is Copr. © 13th Street Repertory Company with newswire version Copr. © 2015 Send2Press (a service of Neotrope). All trademarks acknowledged. Information is believed accurate, as provided by news source or authorized agency, however is not guaranteed, and you assume all risk for use of any information found herein/hereupon.