"We are trying to create something special in a calendar space where previously nothing existed," said CEO and Founder Bo Lebastchi.

SEATTLE, Wash., Oct. 20, 2014 (SEND2PRESS NEWSWIRE) — Indoor Triathlon USA (ITUSA) is pleased to announce the launching of its new Indoor Triathlon USA Series in 2015. The first national, standardized triathlon series – indoors! “We are trying to create something special in a calendar space where previously nothing existed,” said CEO and Founder Bo Lebastchi. Unlike most indoor triathlons that currently operate, ITUSA events are real racing.

Almost all indoor triathlons currently use spin bikes or Lifecycles for the bike leg of their events with settings and resistance set randomly. While this might be good exercise it is NOT a race. What separates Indoor Triathlon USA is its exclusive use of Elite Fluid Trainers that automatically calibrate to the rider’s weight. This creates a level playing field for the athletes. They bring their own bike and Indoor Triathlon USA supplies the trainer.

Additionally, Indoor Triathlon USA creates virtually identical courses in every venue:
* Every Course is an i55 Distance Event: 10 min Swim / 30 min Bike / 15 min Run.
* Every Swim is in a 25 yard pool (with distance recorded every 25 yards.)
* Every Bike is the athlete’s bike on ITUSA supplied fluid trainers (with rear wheel odometers set to the individual’s wheel size to measure distance).
* Every Run is on a no-grade, flat, 50 yards out-n-50 yards back course (with distance recorded every 50 yards, not to exceed four left turns in total).

Indoor triathlon has always been a good introduction to the sport for first timers and ITUSA expects its events to continue that trend.

“Remember,” says Bo Lebastchi “the newbie to the sport only has to go as far as they choose to go. If they can only swim one lap in 10 minutes, bike a quarter mile in 30 minutes and run 100 yards in 15 minutes that’s fine. They have still, officially, completed the event. They receive the same beautiful finisher’s medal as everyone else.”

Where Indoor Triathlon USA also differs from other indoor events is in its appeal to the competitive triathlete. Yes, every race will have both age group and overall winners. But because of its standardized course, every venue’s race results will also be part of larger, national data base. There, athlete results from all ITUSA races will be ranked against each other.

The athlete’s ranking along with results in The Indoor Triathlon World Championship, in Las Vegas April 19, 2015, will contribute to the athlete’s final ranking and possible All-American Honors.

For more information go to: http://IndoorTriathlonUSA.com/.

Please send any and all questions to: Info@IndoorTriathlonUSA.com. 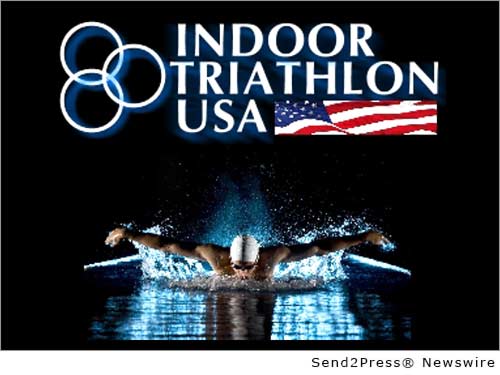 NEWS ARCHIVE NOTE: this archival news content, issued by the news source via Send2Press Newswire, was originally located in the Send2Press® 2004-2015 2.0 news platform and has been permanently converted/moved (and redirected) into our 3.0 platform. Also note the story “reads” counter (bottom of page) does not include any data prior to Oct. 30, 2016. This press release was originally published/issued: Mon, 20 Oct 2014 09:00:15 +0000

View More Entertainment News
"We are trying to create something special in a calendar space where previously nothing existed," said CEO and Founder Bo Lebastchi.

LEGAL NOTICE AND TERMS OF USE: The content of the above press release was provided by the “news source” Indoor Triathlon USA or authorized agency, who is solely responsible for its accuracy. Send2Press® is the originating wire service for this story and content is Copr. © Indoor Triathlon USA with newswire version Copr. © 2014 Send2Press (a service of Neotrope). All trademarks acknowledged. Information is believed accurate, as provided by news source or authorized agency, however is not guaranteed, and you assume all risk for use of any information found herein/hereupon.