KITTY HAWK, N.C., Nov. 20, 2013 (SEND2PRESS NEWSWIRE) — New Maritima Press says that John Amrhein, Jr., their author from the Outer Banks of North Carolina, made a surprising discovery while researching his award winning book, “Treasure Island: The Untold Story” (ISBN 978-0983084303). Father Junipero Serra played a pivotal role in this dramatic true story he has documented with a team of international researchers.

The Nuestra Senora de Guadalupe, the Spanish galleon which carried Junipero Serra and his contemporary biographer, Francisco Palou, to Mexico in 1749, was the same ship whose treasure cargo from Mexico would find itself buried by pirates on a deserted Caribbean Island the following year.

“Robert Louis Stevenson’s ‘Treasure Island’ almost never happened,” explains John Amrhein, resident of the Outer Banks where the Wright Brothers made man’s first powered flight. He owes an article by Maynard J. Geiger, a Franciscan, and modern biographer of the venerable Father Serra, which identified the galleon and linked his own research being done in the Spanish archives. Although Amrhein grew up in Richmond, Virginia, he immediately recognized who Junipero Serra was because of his Catholic school education.

The Guadalupe had left Cadiz, Spain, on August 28, 1749, under Captain Juan Manuel Bonilla. On board were twenty Franciscans as well as Dominican friars and cargo destined for Veracruz, Mexico. The Guadalupe was blown off course near Veracruz before encountering a hurricane that would bring the crew to total despair. Then, Father Serra and the friars joined in prayer and praise to St. Barbara whose feast was that day of December 4. “The storm ceased immediately and the opposing wind became so mild that within two days we anchored in Veracruz,” reported Palou in his 1787 memoir.

After enduring ninety-nine days at sea, with a stop in Puerto Rico, Serra elected to walk to Mexico City from Veracruz rather than ride the horse that was offered to him. Junipero Serra would later found nine mission churches in California. San Carlos Borremeo, in Carmel, was not only his favorite but became his final resting place.

His link to Robert Louis Stevenson and Treasure Island did not end with the Guadalupe. In December of 1879, while Stevenson was visiting Monterey and his future wife, Fanny Osbourne, his soon-to-be brother-in-law took him to Father Serra’s church in Carmel where Serra was buried in 1784 and then in ruins. Stevenson was so moved by the devotion of the Indians it brought tears to his eyes. He then wrote an article in the local paper pleading for donations to restore the mission. It almost seems that Father Serra repaid the favor, because the struggling and little known author would write “Treasure Island” shortly after his return to Scotland. It was his first, and probably his most recognizable, success. That tale of buried treasure revolves around a map dated 1750 that would lead Jim Hawkins and Long John Silver to the Caribbean Island where the treasure was buried.

“It’s no coincidence to me,” says Amrhein “It’s a miracle.” Amrhein also points out that this month marks the 130th anniversary of the publication of “Treasure Island.”

Father Junipero Serra was beatified by the Vatican in 1988 after the miraculous healing of a nun attributed Serra’s intervention the year before. All that is needed now to reach sainthood is one more miracle attributed to him. In Amrhein’s eyes that’s already been done. He believes that there probably would not have been a “Treasure Island” for Mr. Stevenson had the Guadalupe sank in 1749 taking Father Serra down with it. The history of California would have been quite different as well. In fact, there would be no “Pirates of the Caribbean” today either because “Treasure Island” is the franchise’s cultural foundation.

Amrhein’s first book, “The Hidden Galleon” (ISBN 978-0-9796872-0-4), describes the fate of the warship that escorted the Guadalupe and wrecked on Assateague Island, Virginia, and its role in the children’s classic, “Misty of Chincoteague.” 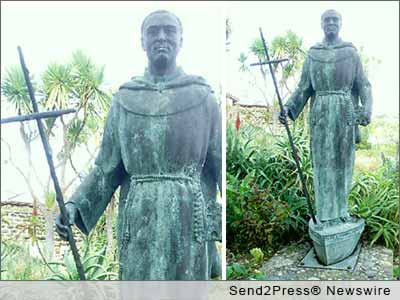 NEWS ARCHIVE NOTE: this archival news content, issued by the news source via Send2Press Newswire, was originally located in the Send2Press® 2004-2015 2.0 news platform and has been permanently converted/moved (and redirected) into our 3.0 platform. Also note the story “reads” counter (bottom of page) does not include any data prior to Oct. 30, 2016. This press release was originally published/issued: Wed, 20 Nov 2013 16:26:09 +0000