NEWPORT BEACH, Calif., Feb. 15, 2013 (SEND2PRESS NEWSWIRE) — There are many methodologies for deciding when to buy and sell in the stock market, and the right advice can be invaluable. From 1951 to 1985, George Lindsay was renowned for his accuracy in predicting market cycles in order to time the buying and selling of market shares. On Feb. 20, “Market Wrap with Moe Ansari,” will host Ed Carlson, author of “George Lindsay’s An Aid to Timing” (ISBN: 978-0615720371).

Station information and podcasts can be found at http://www.compak.com/market-wrap-with-moe.html .

During the show, Carlson will discuss Lindsay’s strategies in timing the market. He will point to specific examples, such as the time in Oct. 1981 when he predicted the end of a bull market in Aug. 1982 within 17 days accuracy. Carlson will make the case for Lindsay’s argument that regular market cycles exist and are predictable enough to determine short-term and long-term market strategy for stocks, stock indices and commodities.

Carlson is also the author of “George Lindsay and the Art of Technical Analysis” (ISBN: 978-0132699068). He is an independent trader and a consultant. He also regularly contributes to multiple financial trade magazines, podcasts and online financial sites. He manages Seattle Technical Advisors ( http://www.seattletechnicaladvisors.com/home.html ) and is a sought-after speaker.

A copy of his book will be given away during the program.

About Market Wrap with Moe Ansari:
Moe Ansari is the president and chief portfolio manager of Compak Asset Management, a wealth and asset management company in Newport Beach, Calif. In 2012, he was named one of Barron’s top 100 independent financial advisors in the nation. He has been producing “Market Wrap with Moe” since 1989 and can be heard on 16 stations across the nation. More information can be found at www.compak.com/market-wrap-with-moe.html. 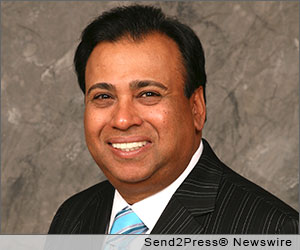 NEWS ARCHIVE NOTE: this archival news content, issued by the news source via Send2Press Newswire, was originally located in the Send2Press® 2004-2015 2.0 news platform and has been permanently converted/moved (and redirected) into our 3.0 platform. Also note the story “reads” counter (bottom of page) does not include any data prior to Oct. 30, 2016. This press release was originally published/issued: Fri, 15 Feb 2013 05:55:01 +0000