KALISPELL, Mont., Feb. 28, 2013 (SEND2PRESS NEWSWIRE) — When the Flathead Community Foundation climbed on board as the title sponsor for the 2012 Montana Dragon Boat Festival, they knew they were in for a wild ride. After a rip-roaring success in 2012, including the $75,000 raised by local non-profits, the Flathead Community Foundation returns as this year’s lead sponsor, it was announced today by the Kalispell Convention and Visitor Bureau.

Working to pair local philanthropists and donations with area non-profits, the goal of the Flathead Community Foundation is to improve the quality of life in the Flathead, forever. The Montana Dragon Boat Festival, hosted by the Kalispell Convention and Visitors Bureau, first sparked the imagination of executive director, Lucy Smith, in early 2012. Smith, impressed with the event’s potential to showcase the Flathead, also saw its possibilities for raising awareness of the Flathead Community Foundation and the non-profits it supports. The Foundation Board was on deck from the outset and it was Paddles Up! for Title Sponsorship. 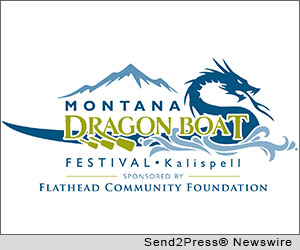 “The Montana Dragon Boat Festival is a perfect fit for the Flathead Community Foundation because of the tremendous opportunity to showcase the Flathead Valley’s greatest resources, from beautiful and pristine Flathead Lake, to thriving local businesses and institutions, to the many nonprofit organizations that serve our community,” says Smith.

In order to follow through on the commitment to serve as title sponsor, the Flathead Community Foundation raised $10,000 to back the sponsorship. The sponsorship investment paid strong dividends in community awareness and funds raised for area non-profits participating in the event.

“The Flathead Community Foundation teamed with the Montana Dragon Boat Festival because of its potential benefit for area nonprofit organizations. Participating in this exciting, high visibility event creates a wonderful opportunity for organizations to raise money and awareness, involve volunteers, and have a blast doing it,” Smith continues.

Non-profits across the Flathead Valley took on the challenge, with 20 entering teams or banding together with other groups to fill a boat. Among the ranks were Big Brothers Big Sisters of Flathead County, Dream Adaptive Recreation, and the Flathead Valley Hockey Association. Other visionary groups such as The Hockaday and A Ray of Hope helped round out the field, each recognizing the unique opportunity presented to highlight the contributions of their organization.

“The foundation of DREAM is that outdoor recreational activities enhance life for individuals with disabilities,” shares executive director for DREAM, Cheri L. DuBeau. “Working together with people who believe in our mission and those who benefit from it in one of the world’s most beautiful backdrops banded us together as a stronger team and helped spread the vision to new supporters.”

The Flathead Valley Hockey Association leveraged the event to build team unity for their upcoming winter season. Team participants were so enthusiastic about its success that the association plans to enter two boats loaded with players – one recreational and one competitive – in 2013. Other non-profits also benefited financially with many raising between $2,000 and $7,000.

“The Montana Dragon Boat Festival creates a perfect metaphor for our community; we are all in the same boat together whether professional business services, non-profits, entrepreneurs, students, or philanthropists,” said Smith. “When we align our different strengths and paddle together, we can move farther and faster than any one of us can do alone. That is the great joy, pride, and power in being a part of the Flathead and its Dragon Boat Festival.”

In 2013, the Flathead Community Foundation will again host the Triple Threat, a trio of dragon boat racing teams open to nonprofits and individuals wishing to participate on a smaller scale and economy than organizing a 22-person dragon boat team. In addition to a place on the racing team, Triple Threat registration for the two-day event will include a signature team shirt and other adornments, special event raffle ticket, tent decorations and an optional donation to the Foundation’s Flathead Fund for community grants and awards to area nonprofits.

Details about the Kalispell Convention and Visitors Bureau’s 2013 Montana Dragon Boat Festival, set for September 7 and 8, are available at http://montanadragonboat.com .

For 2013 Montana Dragon Boat Festival more information about event registrations or sponsorships contact Rob Brisendine at the Kalispell Convention and Visitors Bureau at 406.758.2820 or Rob@discoverkalispell.com.

About Kalispell, Montana:
Located in the center of the Flathead Valley, Kalispell is the gateway to Glacier National Park, Flathead Lake, Whitefish and all of the recreation, art, shopping and adventure that northwestern Montana has to offer. http://www.discoverkalispell.com .

About the Flathead Community Foundation:
The Flathead Community Foundation is a tax-exempt public charity established in 2005 with a mission to improve the quality of life in the Flathead, forever. The foundation works with donors to realize their philanthropic goals through donor advised funds and permanent endowments, and partner with local nonprofits to address community needs through grant making and special initiatives. For more information visit www.flatheadcommunityfoundation.org . 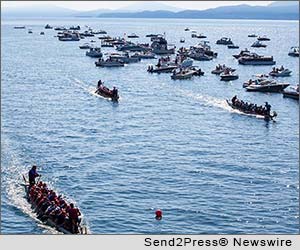 NEWS ARCHIVE NOTE: this archival news content, issued by the news source via Send2Press Newswire, was originally located in the Send2Press® 2004-2015 2.0 news platform and has been permanently converted/moved (and redirected) into our 3.0 platform. Also note the story “reads” counter (bottom of page) does not include any data prior to Oct. 30, 2016. This press release was originally published/issued: Thu, 28 Feb 2013 15:18:05 +0000

ABOUT THE NEWS SOURCE:
Kalispell Convention and Visitor Bureau

LEGAL NOTICE AND TERMS OF USE: The content of the above press release was provided by the “news source” Kalispell Convention and Visitor Bureau or authorized agency, who is solely responsible for its accuracy. Send2Press® is the originating wire service for this story and content is Copr. © Kalispell Convention and Visitor Bureau with newswire version Copr. © 2013 Send2Press (a service of Neotrope). All trademarks acknowledged. Information is believed accurate, as provided by news source or authorized agency, however is not guaranteed, and you assume all risk for use of any information found herein/hereupon.