“784 Broadway” has been described as a “northern version of ‘Huckleberry Finn’ and just as enchanting.”

Ring’s stories, rich with humor and wisdom, span nearly three decades and are an impressive chronicle of small-town life in the iconic Hudson Valley.

As Ring tells it, these annual visits to his family’s greengrocer located at “784 Broadway” in Kingston, N.Y., since 1894, had a profound role in shaping his character and guiding him from childhood into adulthood – even influencing his career as an FBI agent. A gifted storyteller, Ring’s characters and stories are equally unforgettable.

Ring is a retired FBI Supervisory Special Agent who investigated the American La Cosa Nostra and the Sicilian Mafia in New England. After retiring from the FBI, Ring founded a business information and investigative service within a major Boston law firm. Ring of Boston and South Dartmouth, Massachusetts, now devotes his full time to writing, and is currently working on a sequel to “Necessary Assets.”

*Photo Caption, book jacket for “784 Broadway” by James A. Ring. 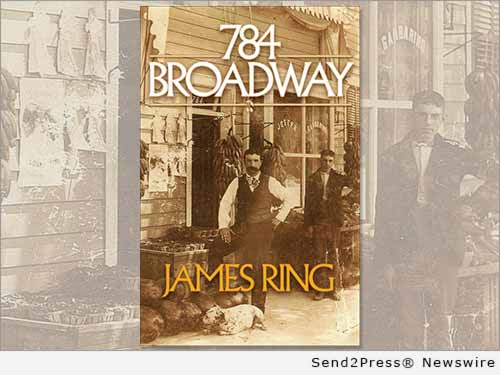 NEWS ARCHIVE NOTE: this archival news content, issued by the news source via Send2Press Newswire, was originally located in the Send2Press® 2004-2015 2.0 news platform and has been permanently converted/moved (and redirected) into our 3.0 platform. Also note the story “reads” counter (bottom of page) does not include any data prior to Oct. 30, 2016. This press release was originally published/issued: Thu, 14 May 2015 13:27:29 +0000

LEGAL NOTICE AND TERMS OF USE: The content of the above press release was provided by the “news source” Omni Publishing Company or authorized agency, who is solely responsible for its accuracy. Send2Press® is the originating wire service for this story and content is Copr. © Omni Publishing Company with newswire version Copr. © 2015 Send2Press (a service of Neotrope). All trademarks acknowledged. Information is believed accurate, as provided by news source or authorized agency, however is not guaranteed, and you assume all risk for use of any information found herein/hereupon.