KATHMANDU, NEPAL, July 31, 2015 (SEND2PRESS NEWSWIRE) — The Adelina Foundation and World Mind Network recently completed a humanitarian and educational project at the TriKa School in Narayanpur, Nepal. According to Director John Toomey, the group engaged students and villagers in several programs designed to improve general health in the region and to inspire educational achievement. Lessons learned in Nepal will be applied to similar projects in the Philippines, Africa, India, the Middle East, and Latin America.

Members were inspired by the accomplishments of school founder and Principal Govinda Panthy, who recently completed construction of the school, the only certified earthquake-safe educational institution in the Dang district of Southwestern Nepal. After the massive April 24 quake that destroyed temples in Kathmandu and Bhaktapur, some Narayanpur residents sought shelter inside the school, afraid to stay in their own homes constructed of un-reinforced mud brick.

The group introduced 3D printing to students, as a way to interest them in science, art, technology, and entrepreneurship.

Panthy and Toomey believe that 3D printing can someday become an economic lifeline for remote villages in Nepal and other developing countries, because it can form the basis for sustainable social enterprises that can create useful household items unavailable in local retail stores. Group members Mary Huang and Pulkit Agrawal partnered with the students in creating a 3D printed model of the Dharahara, the legendary nine story tower in Kathmandu which was a symbol of Nepali statehood and which was tragically destroyed by the April quake.

Previously, the Foundation had purchased a solar roof panel for the school, making it the only local school with a permanent source of power.

Participants brought 27 of the newest model of Sawyer PointONE water purifiers, each capable of turning the village’s unsafe well water into 150 gallons a day of pure, healthy water by filtering out harmful bacteria and protozoa. Previous studies conducted in the same village by Open World Cause, a group associated with the University of Kansas that spent a month at the TriKa School in June, had shown that every household in the village had at least one family member affected by water-borne diseases. Several families reported that disease alone had been preventing them from sending their children to school.

Group members also worked with students in creating a public relations campaign to alert Nepalis about the dangers of antibiotic abuse. Antibiotics are often available without prescription in Nepal, which means that their overuse has led to mutations in bacterial pathogens, making them resistant to common medicines. Students will conduct a campaign on social media, radio, and newspapers to spread public awareness about the issue.

There was also a discussion with students about the new Nepal Constitution, which has been several years in the making and has initiated vigorous disagreement among opposing political parties.

The Foundation welcomes public comment, and even participation in future missions around the world. For more information contact worldmindnetwork@gmail.com. Also see http://worldmindnetwork.net/ and http://openworldcause.com/. 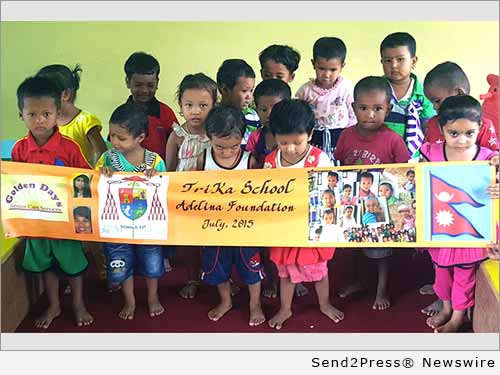 NEWS ARCHIVE NOTE: this archival news content, issued by the news source via Send2Press Newswire, was originally located in the Send2Press® 2004-2015 2.0 news platform and has been permanently converted/moved (and redirected) into our 3.0 platform. Also note the story “reads” counter (bottom of page) does not include any data prior to Oct. 30, 2016. This press release was originally published/issued: Fri, 31 Jul 2015 16:45:09 +0000