"People don't know about me, but when they find out, Donald Trump has no chance," Lowe says. "If Trump supporters like him, they will love me."

“People don’t know about me, but when they find out, Donald Trump has no chance,” Lowe says. “If Trump supporters like him, they will love me.”

Like many Americans, Lowe is ready for new leadership, but he can’t find anyone to get behind. So, what’s a frustrated American to do?

Lowe believes that he and his running mate, Richardson, are just the people for the job. He’s been running his campaign like a chess game and Lowe says that it’s all coming together.

Lowe’s experience and background are diverse. He’s been overcoming challenges all his life and is up to this one too. He is an active supporter of the military and says he’s always “loaded and ready to go.” Among his political stances, he believes in the right to bear arms, less taxes, guaranteed higher learning, a better healthcare system and less government. He believes he can improve the economy by 38.7 percent within three years – the duration of his proposed term – where his vice president will take over in the fourth year.

Lowe says that, like many citizens, he has a desire to play an active role in making his community, state and country a safer, and better place to raise children, to run a business and to forge a future filled with unlimited promise.

Richardson was born in New Orleans and served in the U.S. Army for seven years. He was a sergeant who deployed to places such as Iraq, Turkey, Kosovo, Poland and Hungary. He earned three achievement medals. He and his wife to be have four children.

“Richardson is an honorable man. He is the right person to help me lead this country from the dark places of poor leadership to a brighter tomorrow,” Lowe says.

DISCLAIMER: This press release is paid for by the Donald Eugene Lowe presidential campaign fund. 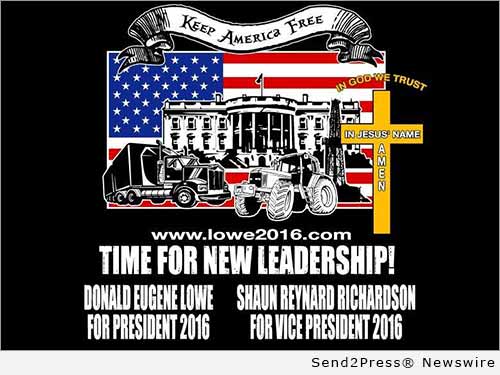 NEWS ARCHIVE NOTE: this archival news content, issued by the news source via Send2Press Newswire, was originally located in the Send2Press® 2004-2015 2.0 news platform and has been permanently converted/moved (and redirected) into our 3.0 platform. Also note the story “reads” counter (bottom of page) does not include any data prior to Oct. 30, 2016. This press release was originally published/issued: Thu, 05 May 2016 19:03:37 +0000

View More Elections and Politics News
"People don't know about me, but when they find out, Donald Trump has no chance," Lowe says. "If Trump supporters like him, they will love me."