Artistic Director Renee Wilson-Wicker says this North American debut is a once in a lifetime opportunity. "We are so honored that Allan A. Craig chose the Gwinnett Choral Guild to deliver his amazing work to new audiences in the states."

Transporting the audience, the 40-member Guild will weave a rich choral tapestry with strings, and percussion. Artistic Director Renee Wilson-Wicker says this North American debut is a once in a lifetime opportunity. “We are so honored that Allan A. Craig chose the Gwinnett Choral Guild to deliver his amazing work to new audiences in the states.”

“The cycle of error, renewal and reward is an integral part of our human journey,” Craig explains. The music of “A Diminished Mass” aims to represent the changing moods of the texts in language that is clear, direct and familiar. My hope is that, as a result, the work can be a brief meeting point on the journeys of those listening and that their shared experience can be an enriching one.”

The Mass begins with Kyrie, a lamenting to Lord for forgiveness. The Gloria section gives praise and thanks to Lord God the heavenly King. Credo, or Creed, is the reaffirmation of faith in God the Father Almighty, who was incarnate by the Holy Ghost of the Virgin Mary. Crucified for us, He arose on the third day according to the Scriptures and ascended into heaven with promise of returning again to judge the living and the dead. The Sanctus section proclaims, “holy, holy, holy God of hosts! Heaven and earth are full of your glory.” Benedictus proclaims, “blessed is he who comes in the name of the Lord. Hosanna in the highest!” The mass concludes with Agnus Dei, a passionate plea from the Lamb of God to “grant us peace, grant us peace, grant us peace.”

The performance will be held at Duluth First United Methodist Church, 3208 Georgia 120, Duluth, Georgia; beginning at 7 p.m. General admission tickets are $15. Tickets for seniors, students and groups of 10 or more are $10. For ticket information visit http://www.GwinnettChoralGuild.org/ or call 404-223-9962.

About the Gwinnett Choral Guild:

Since 1983 the Gwinnett Choral Guild has performed throughout the Atlanta area and Georgia, as well as at the Biltmore House in Asheville, N.C.; the Piccolo Spoleto Festival in Charleston, S.C.; Carnegie Hall in New York City; and the Vermont International Choral Festival in Stowe, Vt. We have also had the privilege of performing in St. Petersburg, Russia, in addition to hosting a Russian choral group in our own Gwinnett County.

Members of the Gwinnett Choral Guild not only sing together, but also work and play together. The Guild’s volunteers serve in leadership positions or on administrative committees. We are proud of our members’ dedication and willingness to contribute service hours to maintain our successful organization. In addition, there are on-going opportunities to celebrate and socialize through activities following rehearsals and performances, parties, outings and trips. We support one another through challenging times. We savor our sense of family. We invite you to join the Guild and discover how your musical involvement will enrich your life. More about the Gwinnett Choral Guild: http://www.gwinnettchoralguild.org/.

Renee Wilson-Wicker is an active performer, conductor, and veteran educator. She earned the Bachelor of Music degree with an emphasis in Vocal Music Education from Capital University in Columbus, Ohio and the Master of Music degree in Voice Performance from the renowned Manhattan School of Music in New York City. More about Wilson-Wicker http://www.gwinnettchoralguild.org/director.html.

About Alan A. Craig:

A Craig is a graduate of the music departments of the universities of Glasgow and Strathclyde. He now combines work as a freelance musician with his role as Director of Music at Glasgow Clyde College. Alan’s music tends to be rooted in conventional harmonic and melodic principles. He aims to engage a wide spectrum of listeners through familiar musical language. This is demonstrated in his two most significant works to date: “A Diminished Mass” (2011) and the one-act children’s opera “The Nicht’s the Nicht!” (2001). In 2011 Alan was recognized for this work when he was awarded Rotary International’s highest award, the Paul Harris Fellowship. More recently Alan has been preparing a selection of his anthems and piano music for general release. More about Craig http://www.conduct.demon.co.uk/Biography/biography.html. 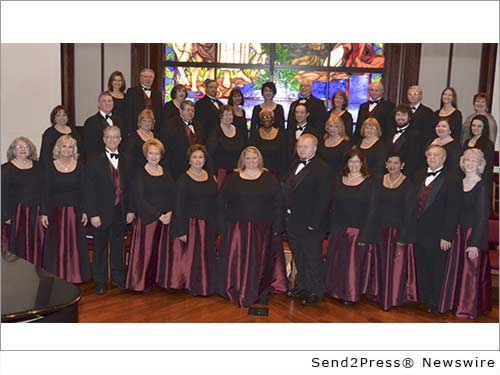 NEWS ARCHIVE NOTE: this archival news content, issued by the news source via Send2Press Newswire, was originally located in the Send2Press® 2004-2015 2.0 news platform and has been permanently converted/moved (and redirected) into our 3.0 platform. Also note the story “reads” counter (bottom of page) does not include any data prior to Oct. 30, 2016. This press release was originally published/issued: Tue, 30 Sep 2014 15:28:43 +0000

View More Entertainment News
Artistic Director Renee Wilson-Wicker says this North American debut is a once in a lifetime opportunity. "We are so honored that Allan A. Craig chose the Gwinnett Choral Guild to deliver his amazing work to new audiences in the states."

LEGAL NOTICE AND TERMS OF USE: The content of the above press release was provided by the “news source” Gwinnett Choral Guild or authorized agency, who is solely responsible for its accuracy. Send2Press® is the originating wire service for this story and content is Copr. © Gwinnett Choral Guild with newswire version Copr. © 2014 Send2Press (a service of Neotrope). All trademarks acknowledged. Information is believed accurate, as provided by news source or authorized agency, however is not guaranteed, and you assume all risk for use of any information found herein/hereupon.