CAMBRIDGE, Mass., April 9, 2015 (SEND2PRESS NEWSWIRE) — The Harvard College Student Startup Showcase and Award Reception will take place Thursday, April 9, from 6-8 p.m. in the Harvard Faculty Club, according to Tiffany Lazo-Cedre, Co-Director of the i3 Innovation Challenge.

i3 has grown to engage about 240 students on 85 teams and over 90 alumni and other professional judges and mentors each year. Here are some i3 success stories:

Following her full-year residency in i3’s innovation space, Stephanie Kaplan ’10 founded HerCampus, the #1 global online community for college women with chapters at over 250 colleges. It has created 20 full-time jobs to date and hundreds of internship opportunities for college businesswomen across the country.

Juniors Nick Krasney and Tuan Ho incubated in the Innovation Space for 1 year while founding Tivli (now Philo), an online television distribution company. Now with 7 team members and Series funding of $6.3M, Philo was named to Fast Company’s list of the World’s 50 Most Innovative Companies.

Undergraduate co-founders Michael Ragalie, Jared Pearlman and Ryan Petersen incubated Verba Software for 15 months in the Innovation Space before moving the company to San Francisco. Now a team of 19, Verba is a bootstrapped, profitable and growing software company on over 350 campuses that helps make higher education more affordable by reducing textbook costs.

Sophomores Jonah Varon and Axel Hansen received a McKinley Family Grant in 2011 for Newsle.com. After incubating in the Innovation Space, Newsle raised $2.5M, hired four engineers, grew to 2 million users and was acquired by LinkedIn in 2014.

Junior Annie Ryu and alumnus Devon Williams received a McKinley Family Grant in 2012 for Global Village Fruits, a for-profit, mission-driven international food company.
Annie graduated in 2013 and as CEO of GVF is an Innovation Space alumni resident. She has raised $500K in angel funding and now sells wholesale to Whole Foods, having set up processing facilities and a supply chain in India that creates local jobs.

Junior Olenka Polak won a McKinley Family Grant in 2013 for her myLingo mobile phone app that provides movie audio in the users’ language of choice. myLingo went on to raise $1M in angel capital and launched with the major motion picture release of Cesar Chavez in 2014 and is now in negotiations with several Hollywood studios.

Another i3 winner, Tyler Bosmeny, transformed his i3 project into Clever, which has now raised $30 million and is being supported by Y Combinator.

Come and meet the next generation of Harvard student innovators!

News issued by: i3 Innovation Challenge 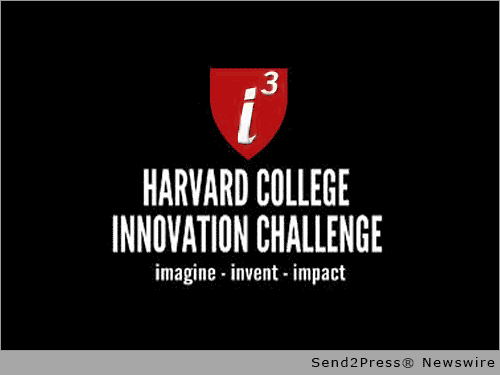 NEWS ARCHIVE NOTE: this archival news content, issued by the news source via Send2Press Newswire, was originally located in the Send2Press® 2004-2015 2.0 news platform and has been permanently converted/moved (and redirected) into our 3.0 platform. Also note the story “reads” counter (bottom of page) does not include any data prior to Oct. 30, 2016. This press release was originally published/issued: Thu, 09 Apr 2015 15:25:05 +0000

More from I3 Innovation Challenge

ABOUT THE NEWS SOURCE:
I3 Innovation Challenge

LEGAL NOTICE AND TERMS OF USE: The content of the above press release was provided by the “news source” I3 Innovation Challenge or authorized agency, who is solely responsible for its accuracy. Send2Press® is the originating wire service for this story and content is Copr. © I3 Innovation Challenge with newswire version Copr. © 2015 Send2Press (a service of Neotrope). All trademarks acknowledged. Information is believed accurate, as provided by news source or authorized agency, however is not guaranteed, and you assume all risk for use of any information found herein/hereupon.