Historic WWII D-Day Flag to be Auctioned this June

"This outstanding flag is perhaps the most historic WWII item I've ever offered, and I'm proud to include it as part of our inaugural online auction in June," says Bruce Hermann, owner of Grenadier Military Antiques Auctions.

SANTA MONICA, Calif., June 3, 2015 (SEND2PRESS NEWSWIRE) — An historic 48-star American D-Day flag – similar to one radio personality Glenn Beck paid $350,000 for in an auction last June – will be offered for auction this June 2015 by Grenadier Military Antiques Auctions (grenadierauctions.com). The auction coincides with the 70th anniversary of the end of WWII and the 71st anniversary of the D-Day landings.

“This outstanding flag is perhaps the most historic WWII item I’ve ever offered, and I’m proud to include it as part of our inaugural online auction in June,” says Bruce Hermann, owner of Grenadier Military Antiques Auctions.

Grenadier Military Antiques Auctions will auction the flag as part of a group that also includes a flare gun owned by late USN signalman third class, his 1945 written personal account of the D-Day landings and the preparation in England for the invasion, and several photographs.

“The flag and the corresponding items from USN LST 139 are family fresh, and have been packed away for seven decades,” says Hermann. “The family of the late USN signalman third class has commissioned Grenadier Military Antiques Auctions to sell the flag group at auction for them.”

In addition to the historic flag, Grenadier Military Antiques Auctions will offer several other rare and collectible items, including other extremely historic items from WWII, uniforms, insignia, edged weapons, medals, documents and photographs, and much more from all nations and time periods. “Items are available for every taste and collecting budget,” says Hermann. Another notable piece to be offered is a tropical helmet owned by Hollywood’s golden age English actor David Niven from his stint in the British army. Those interested on placing bids can go to www.grenadierauctions.com.

About Grenadier Military Auctions:
Grenadier Military Antiques Auctions is headed by Bruce B. Hermann, a longtime military collector and dealer and ANTIQUES ROADSHOW appraiser for 11 years, along with business partner Kevin Finley.

“This online platform provides consignment, bidding, and sales opportunities from an established organization that collectors and clients can trust,” says owner Hermann. “We bring together both the buyer and seller of original quality military antiques in a secure domain.” 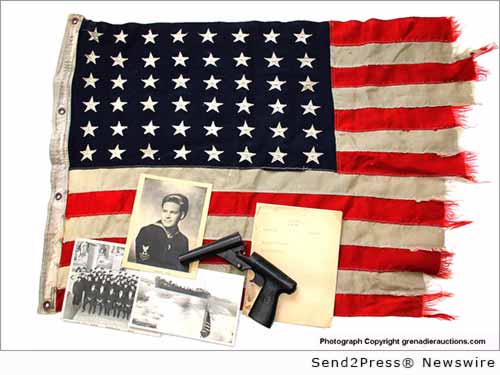 NEWS ARCHIVE NOTE: this archival news content, issued by the news source via Send2Press Newswire, was originally located in the Send2Press® 2004-2015 2.0 news platform and has been permanently converted/moved (and redirected) into our 3.0 platform. Also note the story “reads” counter (bottom of page) does not include any data prior to Oct. 30, 2016. This press release was originally published/issued: Wed, 03 Jun 2015 07:01:09 +0000

View More Auction News
"This outstanding flag is perhaps the most historic WWII item I've ever offered, and I'm proud to include it as part of our inaugural online auction in June," says Bruce Hermann, owner of Grenadier Military Antiques Auctions.

LEGAL NOTICE AND TERMS OF USE: The content of the above press release was provided by the “news source” Grenadier Military Antiques Auctions or authorized agency, who is solely responsible for its accuracy. Send2Press® is the originating wire service for this story and content is Copr. © Grenadier Military Antiques Auctions with newswire version Copr. © 2015 Send2Press (a service of Neotrope). All trademarks acknowledged. Information is believed accurate, as provided by news source or authorized agency, however is not guaranteed, and you assume all risk for use of any information found herein/hereupon.