"Joey's ribs and sauces were award winning in Southern California, so we are more than excited to bring that quality and taste to the Scottsdale area," says Cristina Maggiore.

PHOENIX, Ariz., April 15, 2015 (SEND2PRESS NEWSWIRE) — Joey and Cristina Maggiore’s family has been servicing the Valley in delicious dining for more thirty years with their fine Italian dining; Cuttlefish Scottsdale being the most recent. Now the start of summer brings the announcement of their new barbecue concept – Hogs N’ Hops BBQ. Hogs N’ Hops is regional, traditional style BBQ with the Maggiore spice thrown in.

In the past two weeks Hogs N’ Hops has proven themselves to be the BBQ answer foodies have been craving.

Saturday, April 18, 2015 brings the grand opening to the Scottsdale location. The event will have a live DJ, prizes, and plenty of food and drink specials.

When asked about the new menu Cristina Maggiore said, “Joey’s ribs and sauces were award winning in Southern California, so we are more than excited to bring that quality and taste to the Scottsdale area.”

The grand opening of Hogs N’ Hops BBQ will be taking place this Thursday, April 16 at their new location at the Shops at Gainey Village, 8777 N. Scottsdale Rd., Scottsdale AZ 85253. 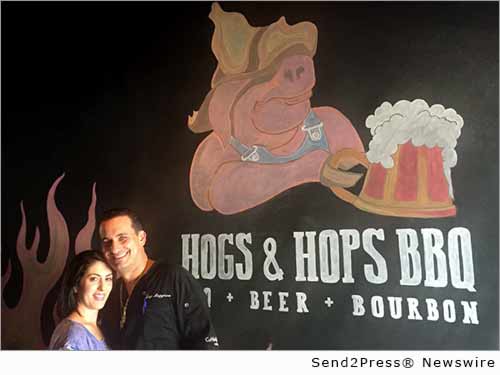 NEWS ARCHIVE NOTE: this archival news content, issued by the news source via Send2Press Newswire, was originally located in the Send2Press® 2004-2015 2.0 news platform and has been permanently converted/moved (and redirected) into our 3.0 platform. Also note the story “reads” counter (bottom of page) does not include any data prior to Oct. 30, 2016. This press release was originally published/issued: Wed, 15 Apr 2015 15:56:03 +0000

View More Arizona Business News
"Joey's ribs and sauces were award winning in Southern California, so we are more than excited to bring that quality and taste to the Scottsdale area," says Cristina Maggiore.

LEGAL NOTICE AND TERMS OF USE: The content of the above press release was provided by the “news source” Hogs N Hops BBQ or authorized agency, who is solely responsible for its accuracy. Send2Press® is the originating wire service for this story and content is Copr. © Hogs N Hops BBQ with newswire version Copr. © 2015 Send2Press (a service of Neotrope). All trademarks acknowledged. Information is believed accurate, as provided by news source or authorized agency, however is not guaranteed, and you assume all risk for use of any information found herein/hereupon.