Home for the Holidays: The Blessings of Christmas Never Grow Old, Even As We Age

"Everything's better at home," Ruth says. This year, her Christmas wish is "for everyone to be happy."

ASHEVILLE, N.C., Dec. 18, 2014 (SEND2PRESS NEWSWIRE) — For 100 of the past 101 Christmases Ruth Ebbs has celebrated, she’s found herself at home surrounded by family and friends. However, after breaking her hip in a fall, she spent last year’s holiday season in a nursing home, fervently wishing she was marking the occasion at home. Now, thanks to the Council on Aging of Buncombe County, Inc., Ruth became one of the increasing numbers of older adults who are reclaiming their ability to live independently at home.

Ruth’s Christmas wish came true. One year later, she is back at home, where she and her daughter, retired attorney Ellie Ebbs, eagerly await the holiday and annual Christmas dinner with extended family.

“Everything’s better at home,” Ruth says. This year, her Christmas wish is “for everyone to be happy.”

Unfortunately, being at home for the holidays feels like an insurmountable obstacle for many Asheville area individuals struggling with the difficulties of aging. This year alone, the Council on Aging of Buncombe County assisted 36 older adults who returned to their homes, and that number is expected to grow, says Wendy Marsh, executive director.

Working with the Council on Aging made a big difference in their lives, says Ellie.

“If not for Council on Aging connecting us with the right programs, Mother would still be in a nursing home, and more likely to be dead or out of her mind,” she says, recalling the negative affect six to seven months of institutionalization had on Ruth’s mental and physical health.

“I spent every night sleeping on the floor by her bed so I could see if she was trying to get out of bed,” she recalls. “She’d fallen four times while she was there.”

The Ebbs women adamantly wanted Ruth to return home, but were waiting until she had increased mobility and the ability to make transfers with less assistance.

“A lot of people think that at a certain age, you shouldn’t keep trying to do things like come home,” says Ellie. “Mother told me that ‘If you’re alive at any age, you need to enjoy it to the fullest that you’re capable of’.”

The waiting to go home proved difficult for Ruth, always known for her independent streak.

Born in 1912, before women had the right to vote, Ruth stood out. As a student, she served as one of two representatives for the state of North Carolina at a National 4-H convention in 1928. Though getting a college education was unusual for a woman of her generation, she graduated from Weaver College, Weaverville, in the early 1930s.

A dietician for the U.S. military during World War II, she later married Ellie’s father and became a full time mother. Her husband, Plato D. Ebbs, a former Marshall, Madison County, state representative from 1915-16, died when Ellie was a few months old. Ruth raised Ellie by herself, maintaining a network in the community through involvement in historical and genealogical organizations like Daughters of the American Revolution.

“Mother has seen a lot of change during her life,” says Ellie. “The Council on Aging is one of the most positive of those changes.”

Enter Donna Case, a social worker with the Council on Aging of Buncombe County. Through the Medicaid program, she assists eligible families with nursing home transitions in Buncombe, Madison, Yancey, Mitchell and Avery Counties. After determining that Ruth’s return home would decrease costs, she shared with Ruth and Ellie a number of resources, including news of programs that could help Ruth get back home where she belonged.

First, Case referred the Epps to a Medicaid program, “Money Follows the Person,” or MFP, which helped pay for Ruth’s transition home, and which waived the waiting list for another source of support. The Community Alternatives Program for Disabled Adults, or “CAP-DA,” is also a Medicaid funded program. For qualified recipients, Medicaid is able to provide in home care focusing on personal care needs. Luckily, Ruth was eligible for that program, too.

“These particular federal initiatives support a return to community living as long as the related Medicaid expenses are lower than Medicaid costs would be to continue living in a nursing home,” says Marsh.

The two programs provided food supplements, and adaptations were made to the family home .The electrical heat got replaced with natural gas, saving hundreds of dollars in winter. The house became more acceptable for Ruth, who feels the cold. So Ruth’s bedroom also got new carpet to insulate the floor, and changes were made to render the bathroom workable.

Gratefully, as in-home aid is in short supply, Ellie was able to take over those responsibilities, receiving a small compensation “since I’m here taking care of Mother anyway.” Additionally, due to the wrap-around services of Council on Aging, Case has been able to stay in touch with the Ebbs family and help with other needs which weren’t apparent until Ruth’s return home. 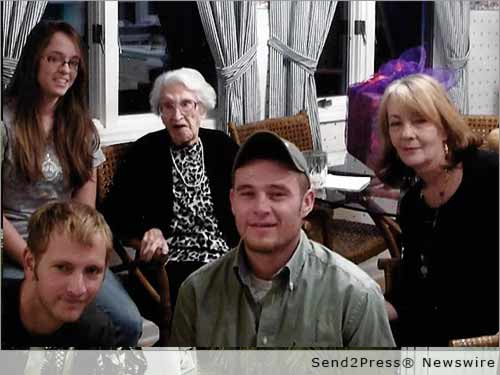 “It is wonderful to have our mother back, the whole family is thrilled,” says Ellie. “Now, Mother participates in family situations. Dinner at a cousin’s house last week was wonderful, and the family will have Christmas dinner here.”

None of these happy occasions would be possible if not for the Council on Aging referral to the CAP program, which she maintains was crucial to her mother’s survival.

“Ruth is just thriving so much more at home,” says Case.

The Council on Aging of Buncombe County, Inc., is a 501(c)3 non-profit agency dedicated to assisting senior adults and their families with information, opportunities, and services that promote and enhance quality of life. For more information, visit http://www.coabc.org/ or call (828) 277-8288 to request assistance, volunteer, make a donation, or become a community partner.

CAPTION PHOTO 1: Ruth Ebbs in a striking hat stands left center, with daughter Ellie, in May 1950, at the Zebulon Vance Monument, downtown Asheville, N.C., in observance of the former state governor’s birthday.

News issued by: Council on Aging of Buncombe County, Inc. 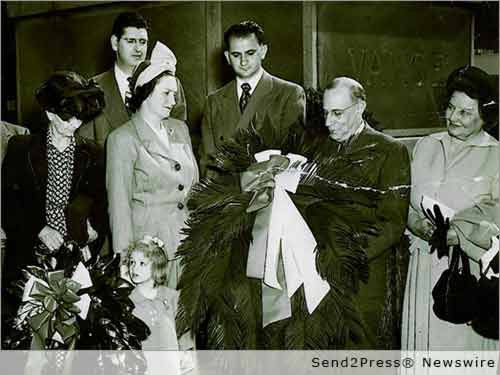 Alternate Headline: After more than a century of Christmases, Asheville’s Ruth Ebbs, 102, proves it’s never too late to come home

NEWS ARCHIVE NOTE: this archival news content, issued by the news source via Send2Press Newswire, was originally located in the Send2Press® 2004-2015 2.0 news platform and has been permanently converted/moved (and redirected) into our 3.0 platform. Also note the story “reads” counter (bottom of page) does not include any data prior to Oct. 30, 2016. This press release was originally published/issued: Thu, 18 Dec 2014 07:00:14 +0000

View More Asheville Business News
"Everything's better at home," Ruth says. This year, her Christmas wish is "for everyone to be happy."

More from Council on Aging of Buncombe County, Inc.

ABOUT THE NEWS SOURCE:
Council on Aging of Buncombe County, Inc.

LEGAL NOTICE AND TERMS OF USE: The content of the above press release was provided by the “news source” Council on Aging of Buncombe County, Inc. or authorized agency, who is solely responsible for its accuracy. Send2Press® is the originating wire service for this story and content is Copr. © Council on Aging of Buncombe County, Inc. with newswire version Copr. © 2014 Send2Press (a service of Neotrope). All trademarks acknowledged. Information is believed accurate, as provided by news source or authorized agency, however is not guaranteed, and you assume all risk for use of any information found herein/hereupon.