Three years after high school graduation and after quitting college, childhood friends, Marcelo and Barry, are waiting tables at the popular Vineyard Restaurant in St. Petersburg, Fla. A year earlier, they’d made a pact to save and open their own place, but Barry’s wasteful spending has derailed those plans.

One evening, Barry is captivated by Emily, a new waitress on vacation from her studies at Miami State. However, her eyes are set on Marcelo. Their lives soon intertwine in the summer of 1978 – a season that would bear rewards for heroism, the bliss of romantic love and the despair of insanity.

Marcelo’s world is tossed upside down when his act of heroism propels him into the limelight. For his good deed, St. Petersburg showers him with cash for the business and the chance to return to college. He wonders if Barry was ever a good choice for a business partner.

While Emily and Marcelo’s romance blooms, Emily ignores the reason for her summer in St. Petersburg: to pressure her widowed grandmother into a retirement home. She struggles to gauge her mother’s agenda against her grandmother’s right to run her life.

Barry, delusional and hallucinating, spirals into darkness. He flees the scene of a car accident, and the next day he is horrified to learn that a teenager is now dead. Bewildered, he leaves town and goes into hiding. Consumed by madness, he longs for the life he left behind.

The novel is a dramatic, yet humorous read that brings levity to the serious topic of mental illness. It’s sure to compel the reader from beginning to end. “Gratuity Not Included” demonstrates that destiny is a myth, people build their own prisons, and hold the key to their future.

Born in Lima, Peru, Ricardo grew up in St. Petersburg, Fla. His inspiration for “Gratuity Not Included” came from a combination of his restaurant work during college and his experience as a psychotherapist. He lives in New York City and is currently at work on his third book.

“Gratuity Not included” is available in paperback for $15 and in Kindle or Nook versions for $7.99. For contact details, review copies, photos and a complete author biography, visit: http://ricardoestrada.net/. 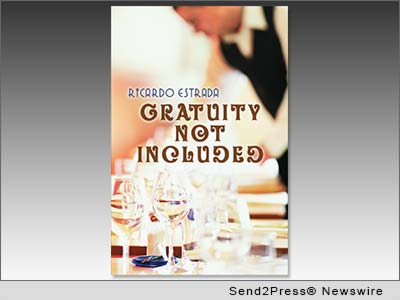 Alternate Headline: Ricardo Estrada’s new novel ‘Gratuity Not Included’ is a dramatic, yet humorous read that brings levity to the serious topic of mental illness

NEWS ARCHIVE NOTE: this archival news content, issued by the news source via Send2Press Newswire, was originally located in the Send2Press® 2004-2015 2.0 news platform and has been permanently converted/moved (and redirected) into our 3.0 platform. Also note the story “reads” counter (bottom of page) does not include any data prior to Oct. 30, 2016. This press release was originally published/issued: Tue, 11 Mar 2014 07:01:09 +0000

ABOUT THE NEWS SOURCE:
Ricardo Estrada

LEGAL NOTICE AND TERMS OF USE: The content of the above press release was provided by the “news source” Ricardo Estrada or authorized agency, who is solely responsible for its accuracy. Send2Press® is the originating wire service for this story and content is Copr. © Ricardo Estrada with newswire version Copr. © 2014 Send2Press (a service of Neotrope). All trademarks acknowledged. Information is believed accurate, as provided by news source or authorized agency, however is not guaranteed, and you assume all risk for use of any information found herein/hereupon.