"Although most of the 'usual suspects' that typically dominate the 'Mortgage Fraud Risk Report' remain, there is a decided 'head east' trend as states like Illinois and Ohio jump up the ranks of the riskiest," said Mike Zwerner, senior vice president of Interthinx.

According to the most recent analysis, overall risk nationwide increased 16 percent over the previous quarter and 9 percent over fourth-quarter 2011. The overriding source of the increase can be traced to a large increase in property valuation fraud risk. Despite a dip in third-quarter 2012, the overall Index has been trending up since the beginning of 2012 and is now at the highest level observed since the inception of this report in second-quarter 2009.

Other notable findings in the most recent report include:

* Florida and Nevada remain the riskiest states, with the Sunshine State retaining its position at the top after usurping Nevada last quarter. Florida has at least three Metropolitan Statistical Areas (MSAs) in the top ten riskiest lists for overall, ZIP codes, property valuation, and occupancy fraud.

* California and its metros remain at high risk, though to a lesser degree than has been observed in the past. Although California metros are still well represented in all of the top ten type-specific lists, the state fell to eighth riskiest this quarter, the lowest it has been since the inception of this report.

* Fraud risk has dropped significantly in many western states over the past year – as typified by a 20 percent drop in risk in Arizona since the fourth quarter of 2011, which fell to seventh place after spending several years in the top three. Conversely, fraud risk has jumped in the eastern United States, most notably in Illinois and Ohio, which are now ranked fifth and sixth riskiest, respectively.

* The large increase in this quarter’s Index value was primarily driven by a 25 percent surge in property valuation fraud risk. This is due to significant increases in risk nationwide and particularly in recovering MSAs in Florida and California, where significant investor activity is creating rapid price changes and opportunities for value manipulation.

The full report is available at http://www2.interthinx.com/MFRR_2012Q4 .

“Although most of the ‘usual suspects’ that typically dominate the ‘Mortgage Fraud Risk Report’ remain, there is a decided ‘head east’ trend as states like Illinois and Ohio jump up the ranks of the riskiest and show a marked increase in property valuation fraud risk, especially in markets with high levels of investor activity,” said Mike Zwerner, senior vice president of Interthinx. “Being aware of these broad-based trends enables our industry to make more informed operating decisions and helps educate those with an interest in our industry.”

“Clearly, this report illustrates the reality that the mortgage industry is driven by trends at the state and metropolitan levels and that the will to commit mortgage fraud is not abating – it is simply shifting strategy to meet opportunity,” added Jeff Moyer, president of Interthinx.

The “Mortgage Fraud Risk Report” is an Interthinx information product created by an internal team of fraud experts. This is the fifteenth time Interthinx has released its quarterly report. The report provides deeper insight into current fraud trends through the analysis of more than 12 million loan applications amassed from the industry’s use of the Interthinx FraudGUARD® loan-level fraud detection tool.

For more information about Interthinx and its “Mortgage Fraud Risk Report,” visit http://www.Interthinx.com/ . 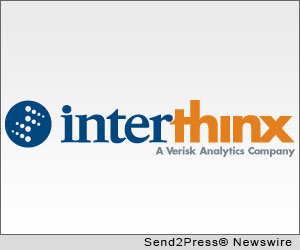 NEWS ARCHIVE NOTE: this archival news content, issued by the news source via Send2Press Newswire, was originally located in the Send2Press® 2004-2015 2.0 news platform and has been permanently converted/moved (and redirected) into our 3.0 platform. Also note the story “reads” counter (bottom of page) does not include any data prior to Oct. 30, 2016. This press release was originally published/issued: Tue, 26 Feb 2013 07:53:03 +0000

View More Banking News
"Although most of the 'usual suspects' that typically dominate the 'Mortgage Fraud Risk Report' remain, there is a decided 'head east' trend as states like Illinois and Ohio jump up the ranks of the riskiest," said Mike Zwerner, senior vice president of Interthinx.

ABOUT THE NEWS SOURCE:
Interthinx

LEGAL NOTICE AND TERMS OF USE: The content of the above press release was provided by the “news source” Interthinx or authorized agency, who is solely responsible for its accuracy. Send2Press® is the originating wire service for this story and content is Copr. © Interthinx with newswire version Copr. © 2013 Send2Press (a service of Neotrope). All trademarks acknowledged. Information is believed accurate, as provided by news source or authorized agency, however is not guaranteed, and you assume all risk for use of any information found herein/hereupon.