"One thing that separates us from {the others} is the quality and strength of our equipment," said Randy Beckett, Plant Manager. "If it never breaks, and you can run it for ten years, you have something that's pretty valuable. And that's something farmers understand."

OSCEOLA, Iowa, Sept. 2, 2015 (SEND2PRESS NEWSWIRE) — Iowa Secretary of Agriculture, Bill Northey made a stop at Salford USA in Osceola, Iowa Wednesday afternoon. Taking time from his busy schedule, Secretary Northey wanted to make sure he continued his discussions with agribusiness professionals and hear, firsthand, the issues they face during the downturn in the Ag market.

During his 2-hour visit and tour, Northey had conversations with Operations Manager, Robert (Tom) Kober, Plant Manager, Randy Beckett, as well as Clarke County Development Corporation’s (CCDC) Executive Director, Bill Trickey. Much of the dialogue was focused on the volatility of today’s Ag environment and its affect on manufacturing and the local economy, as well as Salford’s positive impact on Osceola’s economy and growing workforce.

When asked about the recent market downturn and how he saw it affecting businesses, Northey said, “There are a lot of people still buying, maybe repairing used equipment, but it’s not like everyone’s shutting down. I’ve talked to people that have said ‘I’ve been conservative, paid stuff down, and now’s the time to trade or upgrade equipment.'”

For Salford, while the softer market has been noticeable, the impact hasn’t been as bad. Through strategic planning and seasonal sales preparations, Kober assured Northey that numbers were looking good, even in the down cycle, which means they’d positioned themselves to benefit even more when the market rebounds.

“This will be a different market,” Kober stated, “Salford brings something so different to the game – even with additional sales staffing – we’ve positioned ourselves where we can benefit – and be a benefit – throughout these changes.”

Canadian-owned Salford Manufacturing moved their USA operations to Osceola in 2007 and soon after showed the company’s focus on integrity, quality, and support of their employees was a priority. Bill Trickey explained, “CCDC gave them our Board of Director’s award because, even during the downturn, they kept their employees on – cleaning, painting, and what-not. And when things picked up, instead of hiring new guys, they gave ’em overtime and helped make the changes needed to make ends meet. That’s why they’re one of our favorites.”

Salford USA staffs 40-45 tradesmen and manufacturing specialists out of Osceola, Iowa. Their primary product is their I-Series secondary tillage products, including field cultivators, fertilizer applicators, coulters, and other field production attachments. Their company’s foundation in Ag manufacturing, along with their founder’s “Don’t touch it unless we can make it better” attitude positions them perfectly for rapid growth and impact in a highly competitive U.S. Ag Manufacturing market.

“One thing that separates us from {the others} is the quality and strength of our equipment,” said Randy Beckett, Plant Manager. “If it never breaks, and you can run it for ten years, you have something that’s pretty valuable. And that’s something farmers understand.” 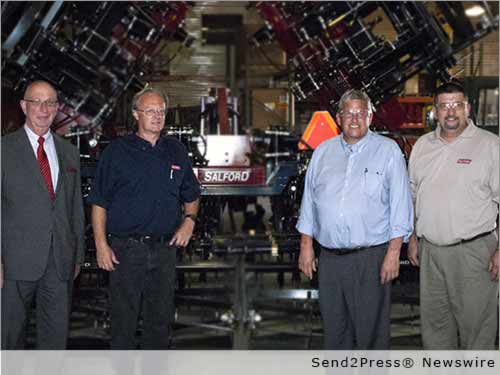 NEWS ARCHIVE NOTE: this archival news content, issued by the news source via Send2Press Newswire, was originally located in the Send2Press® 2004-2015 2.0 news platform and has been permanently converted/moved (and redirected) into our 3.0 platform. Also note the story “reads” counter (bottom of page) does not include any data prior to Oct. 30, 2016. This press release was originally published/issued: Wed, 02 Sep 2015 07:00:50 +0000

View More Agriculture News
"One thing that separates us from {the others} is the quality and strength of our equipment," said Randy Beckett, Plant Manager. "If it never breaks, and you can run it for ten years, you have something that's pretty valuable. And that's something farmers understand."

ABOUT THE NEWS SOURCE:
Salford USA

LEGAL NOTICE AND TERMS OF USE: The content of the above press release was provided by the “news source” Salford USA or authorized agency, who is solely responsible for its accuracy. Send2Press® is the originating wire service for this story and content is Copr. © Salford USA with newswire version Copr. © 2015 Send2Press (a service of Neotrope). All trademarks acknowledged. Information is believed accurate, as provided by news source or authorized agency, however is not guaranteed, and you assume all risk for use of any information found herein/hereupon.