Owner, Bret Baldwin states that, "We like the fact that our shirts are putting a smile on people's face and making them happy, but there's a bigger purpose to our little business."

DES MOINES, Iowa, Aug. 17, 2015 (SEND2PRESS NEWSWIRE) — Bassackwards Tees™, a Des Moines based clothing company, has announced that due to increasing customer demand, they have just released an additional four state T-shirts to their lineup, which include Illinois, West Virginia, Arkansas and Georgia. The company already offers their unique, increasingly popular and “crazy soft” shirts for eight U.S. states bringing the total now to twelve states overall.

According to their website – www.bassackwardstees.com – customers can send email requests for new states to be added to their list.

What started out as somewhat of a local following in Iowa has now grown to include surrounding states, including what have quickly become their best sellers; the states of Florida, Texas, New York, and California.

Owner, Bret Baldwin states that, “We like the fact that our shirts are putting a smile on people’s face and making them happy, but there’s a bigger purpose to our little business than just selling cool T-shirts. Since the 2012 diagnosis of Duchenne Muscular Dystrophy for our two little nephews, our family has endured the roller-coaster of emotions, the financial burden of medical needs and treatment, and the stark reality of what the future holds for our two little guys and thousands of other little boys around the world.”

He adds, “Because of our first-hand and personal experience with this terrible disease in our own family we have committed to donating a minimum of 10 percent of all profits to help find a cure for DMD.”

The company intends to continue adding additional states according to demand until all 50 U.S. states are available and also has plans to offer limited addition shirts that will follow the same “bassackwards” theme.

About Bassackwards Tees:
Bassackwards Tees is a locally owned and operated clothing company based in Des Moines, Iowa that designs and sells a unique style of men’s and women’s T-shirts based on U.S. states. The company’s clothing is only available online and is expanding their lineup of states based off of customer demand. 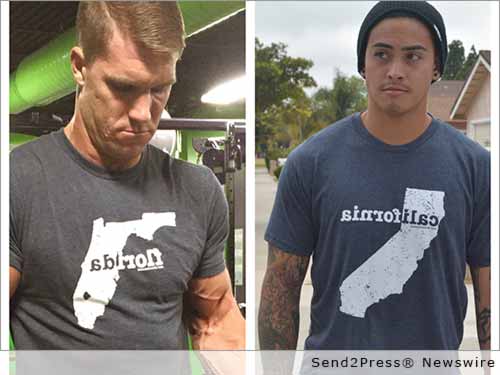 Alternate Headline: Think some states are backward? Wear it on a T-Shirt from Bassackwards Tees

NEWS ARCHIVE NOTE: this archival news content, issued by the news source via Send2Press Newswire, was originally located in the Send2Press® 2004-2015 2.0 news platform and has been permanently converted/moved (and redirected) into our 3.0 platform. Also note the story “reads” counter (bottom of page) does not include any data prior to Oct. 30, 2016. This press release was originally published/issued: Mon, 17 Aug 2015 08:00:52 +0000

View More Entertainment News
Owner, Bret Baldwin states that, "We like the fact that our shirts are putting a smile on people's face and making them happy, but there's a bigger purpose to our little business."

ABOUT THE NEWS SOURCE:
Bassackwards Tees

LEGAL NOTICE AND TERMS OF USE: The content of the above press release was provided by the “news source” Bassackwards Tees or authorized agency, who is solely responsible for its accuracy. Send2Press® is the originating wire service for this story and content is Copr. © Bassackwards Tees with newswire version Copr. © 2015 Send2Press (a service of Neotrope). All trademarks acknowledged. Information is believed accurate, as provided by news source or authorized agency, however is not guaranteed, and you assume all risk for use of any information found herein/hereupon.