Grammy nominated rapper and actor JaRule, his wife Aisha, with their two sons, Jeffery Jr. and Jordan of MTV’s “Follow The Rules,” a comedic half-hour docu-series; Shanice Williams, actress, singer and the new break-out star, best known for her role as “Dorothy” in the recently televised live performance of NBC’s “The Wiz Live!” — and Nai Williams, representing the James Brown Family Performing Arts Center Fashion Inspires Program, were on hand to give children holiday gifting.

The children and families also received a visit from jolly Old Saint Nick and a special holiday performance from Josiah Borden and Brandon Williams.

About Harmony House:
Harmony House is the largest transitional living facility in Newark, New Jersey. Their primary goal is to help families in moving from homelessness to permanent housing and from dependency to self-sufficiency. Harmony House much more than shelter, it offers stability to families facing seemly insurmountable barriers and enables them to restore their lives.

About The James Brown Family Foundation:
The James Brown Family Foundation (JBFF) is a 501(c)(3) non-profit organization created in accordance with the wishes of James Brown. Based on James Brown’s strong belief in education and his musical history with the world, The JBFF mission is to help those who are less fortunate. Our vision is to develop and support new and existing music education programs and provide support to students who pursue a career in the music and entertainment industry.

The James Brown Family Foundation continues giving annually in Augusta, Ga., his hometown, and has conducted turkey and toy giveaways in the tri-state area, helping children and families. Continuing this legacy was a tradition James Brown started over 20 years ago. For more information visit: http://www.jamesbrownfamilyfdn.org/. 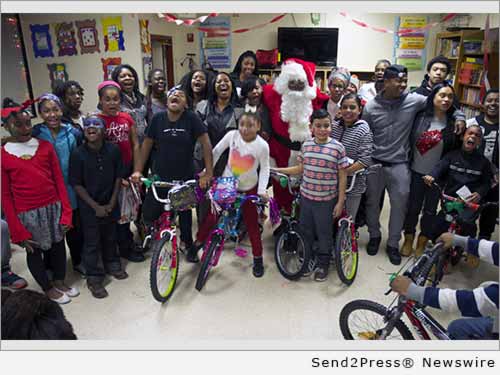 NEWS ARCHIVE NOTE: this archival news content, issued by the news source via Send2Press Newswire, was originally located in the Send2Press® 2004-2015 2.0 news platform and has been permanently converted/moved (and redirected) into our 3.0 platform. Also note the story “reads” counter (bottom of page) does not include any data prior to Oct. 30, 2016. This press release was originally published/issued: Wed, 16 Dec 2015 17:18:01 +0000

LEGAL NOTICE AND TERMS OF USE: The content of the above press release was provided by the “news source” James Brown Family Foundation or authorized agency, who is solely responsible for its accuracy. Send2Press® is the originating wire service for this story and content is Copr. © James Brown Family Foundation with newswire version Copr. © 2015 Send2Press (a service of Neotrope). All trademarks acknowledged. Information is believed accurate, as provided by news source or authorized agency, however is not guaranteed, and you assume all risk for use of any information found herein/hereupon.