"This year's Jeff Fest Arts & Musical Festival there will be something for everyone and it's worth grabbing your lawn chair, relaxing at the park, and listening to some great local and national bands," said 45th Ward Alderman, John Arena. "This festival is meant for the whole community to enjoy. It's designed for families and friends to gather. It's simply a great way to spend an afternoon."

CHICAGO, Ill., May 22, 2013 (SEND2PRESS NEWSWIRE) — Jeff Fest Arts & Music Festival is pleased to announce its three-day musical lineup and headliners including Dot Dot Dot, Magic Box and the Michael McDermott Band. Jefferson Memorial Park’s lush green lawn and ball fields transform into a giant backyard for all to enjoy over the course of the three-day festival from Friday, July 26 through Sunday, July 28, 2013. Located in Jefferson Park on Chicago’s Northwest side, Jeff Fest Arts & Music Festival has become one of Chicago’s most highly anticipated neighborhood music festivals of the summer.

“This year’s Jeff Fest Arts & Musical Festival there will be something for everyone and it’s worth grabbing your lawn chair, relaxing at the park, and listening to some great local and national bands,” said 45th Ward Alderman, John Arena. “This festival is meant for the whole community to enjoy. It’s designed for families and friends to gather. It’s simply a great way to spend an afternoon.”

Thanks to media partner, 93.1 WXRT Chicago, the three-day Jeff Fest Arts and Music Festival offers music ranging from soul, alternative rock, folk rock to techno pop. The festivals headlining band for Friday includes Dot Dot Dot. The Chicago-based “energized pop-rock” quintet, Dot Dot Dot, is a rare breed. This band is building a fan base across the country and making a mark on the music industry on its own terms. By performing both cover songs and original music, the group explores every aspect of two distinct scenes. The cover show consists of fun hits from the ’80s through today, and the original show hosts catchy songs from the group’s own growing catalog. Setting no boundaries-and a fearless desire to play music full-time-keeps this band moving forward.

Saturday’s headliner includes Magic Box. Ed Anderson and Scott Tipping have been making music and mayhem together since the late ’90s. Ed moved on to found roots rock trio Backyard Tire Fire in 2001. Scott went on to become a mainstay of the Chicago music scene, playing and touring with bands like Backyard Tire Fire, The Mighty Blue Kings, Peter Himmelman, and Cornmeal. Today, Magic Box, along Chicago musical heavy-weights Steve Gillis (Filter), Scott Stevenson (Robbie Fulks, Dick Smith), and Matt Thompson (The Mighty Blue Kings, Frisbie), stay true to their rock-and-roll tradition while transitioning into a more dynamic, harmony-oriented sound. Most of their new EP has been featured on WXRT’s Local Anesthetic.

Sunday’s headliner includes Rock Ridge Music Recording Artist, Michael McDermott. McDermott is a singer and songwriter, performer and storyteller to the depths of his soul. He has an uncanny ability to communicate and connect with fans by way of universal truths through his own personal experiences. His 2012 release, Hit Me Back, represents a new chapter in his career as McDermott is a father, a philanthropic entrepreneur, and has experienced the loss of an adored parent. All are major life changes which have found achingly honest expression in his songs.

Directions:
Jefferson Memorial Park is located at 4822 N. Long Avenue, just west of Milwaukee Avenue. Fest-goers are encouraged to take public transportation, as the Jefferson Park Metra and CTA Blue Line are just a block from the festival grounds. Plenty of bike racks also will be available. Free parking will be marked and available in area parking lots.

For more information, go to http://JeffFest.org/ . Be sure you are the first to hear of announcements and plans for Jeff Fest and follow @JeffFestChicago on Twitter and Facebook ( https://www.facebook.com/pages/Jeff-Fest-Arts-Music-Festival/96599731822 ). 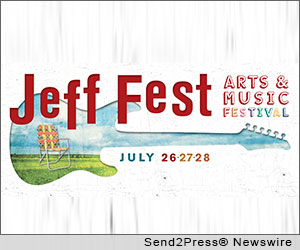 NEWS ARCHIVE NOTE: this archival news content, issued by the news source via Send2Press Newswire, was originally located in the Send2Press® 2004-2015 2.0 news platform and has been permanently converted/moved (and redirected) into our 3.0 platform. Also note the story “reads” counter (bottom of page) does not include any data prior to Oct. 30, 2016. This press release was originally published/issued: Wed, 22 May 2013 14:15:10 +0000

View More Chicago Business News
"This year's Jeff Fest Arts & Musical Festival there will be something for everyone and it's worth grabbing your lawn chair, relaxing at the park, and listening to some great local and national bands," said 45th Ward Alderman, John Arena. "This festival is meant for the whole community to enjoy. It's designed for families and friends to gather. It's simply a great way to spend an afternoon."