"Jeff Fest is known for its food and its arts and music. We are kicking up the food a few notches this year, and have a broader assortment than ever before," says Amie Zander, Executive Director of the Jefferson Park Chamber of Commerce.

CHICAGO, Ill., June 22, 2015 (SEND2PRESS NEWSWIRE) — Every Chicago Festival needs the right food to complement the entertainment, and to satisfy every taste. Jeff Fest 2015 features the best of local neighborhoods and offers a wide range of culinary delights for everyone. “Jeff Fest is known for its food and its arts and music. We are kicking up the food a few notches this year, and have a broader assortment than ever before,” says Amie Zander, Executive Director of the Jefferson Park Chamber of Commerce.

The 2015 Jeff Fest Arts and Music Festival runs July 24-26 and is presented by the Jefferson Park Chamber of Commerce, in partnership with the Jefferson Memorial Park Advisory Council and the Chicago Park District, along with media partner 104.3 K-HITS Chicago.

A special discounted ticket offer is available at http://www.JeffFest.org/ before July 4. For $12, you can enjoy admission, two beers, one ear of corn, and a reusable mug that will get you $1 off on beer refills.

Here’s the food and beverage rundown:
* Gale Street Inn, 4914 N. Milwaukee Avenue, will serve up grilled corn on the cob as well as the popular ribs that have helped make Jefferson Park famous for 52 years.
* Leadbelly Burgers is a new addition to the Fest, and has quickly become part of the community, serving up one-of-a-kind burgers at two locations, 5739 W. Irving Park and 5691 N. Milwaukee Avenue.
* Chicago-style hot dogs with all the fixin’s from Smilin Dawgs will be served for the first time. Smilin Dawgs operates a popular food truck that is a staple at summer fairs and festivals.
* Fest food favorites will be back:
o Caponies Food Truck: fresh pizza
o Chicago Cupcake: unique and flavorful cupcakes
o Creative Cooking: funnel cakes
* Lake Shore Beverage (Bud Light and Goose Island) and Lagunitas Brewing are providing the variety of beer this year.
* Brugal Rum is new to the Fest and will be serving special tropical fruit drinks.

The popular three-day Jeff Fest Arts & Music Festival runs Friday, July 24 through Sunday, July 26, 2015 and takes place on the grounds of Jefferson Memorial Park and includes a family-picnic area to enjoy the neighborhood food favorites. There are also two stages, a designated Kid’s Zone, art to purchase, and a juried photo art competition. Festival tickets can be bought at http://www.jeffersonpark.net/.

Friday kicks off with some “heavy metal” sound from Eliminator and Blackened, and Sunday features JC Brooks and the Uptown Sound (JCBUS). JCBUS call Chicago its home, and has toured North America and Europe, including playing at Lollapalooza.

Jefferson Memorial Park is located at 4822 N. Long Avenue, just west of Milwaukee Avenue. Fest-goers are encouraged to take public transportation, as the Jefferson Park Metra and CTA Blue Line transportation hub is just a block from the festival grounds. Plenty of bike racks also will be available. Road closures: Linder Avenue and Long Avenue will be blocked off between Higgins and Lawrence Avenue for the three-day festivities.

For more information, go to http://www.JeffFest.org/. Be sure you are the first to hear of announcements and plans for Jeff Fest and follow @JeffFestChicago on Twitter and Jeff Fest Arts and Music Festival on Facebook. 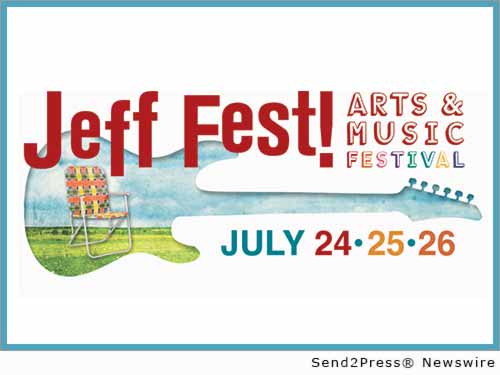 NEWS ARCHIVE NOTE: this archival news content, issued by the news source via Send2Press Newswire, was originally located in the Send2Press® 2004-2015 2.0 news platform and has been permanently converted/moved (and redirected) into our 3.0 platform. Also note the story “reads” counter (bottom of page) does not include any data prior to Oct. 30, 2016. This press release was originally published/issued: Mon, 22 Jun 2015 07:01:00 +0000

View More Entertainment News
"Jeff Fest is known for its food and its arts and music. We are kicking up the food a few notches this year, and have a broader assortment than ever before," says Amie Zander, Executive Director of the Jefferson Park Chamber of Commerce.