Send2Press › Wire › Entertainment › Books and Publishing › An Easier Way to Change Jobs: Seven job hunting myths that many people believe, and that cause them to fail

An Easier Way to Change Jobs: Seven job hunting myths that many people believe, and that cause them to fail

NEW YORK, N.Y., Oct. 6, 2014 (SEND2PRESS NEWSWIRE) — In a job market where 30 to 40 million resumes are being circulated all the time, Robert Gerberg, author of “The Professional Job Changing System” and dozens of other books on job hunting, has released entirely new guidelines for professionals and executives seeking from $60,000 to $300,000+, in his new book “An Easier Way to Change Jobs (2015 Edition).”

This e-book, “An Easier Way to Change Jobs,” is available on Amazon.com at $4.95. In this remarkably easy-to-read book, his new concepts quickly dismiss many common myths about the job market and are designed to make job hunting significantly faster for any serious professional, manager or executive. For example,

1. In a slow economy there are not many jobs available for me. The answer is that actually many jobs at professional levels are always available. The annual turnover rate for professional and executive jobs is 25 percent. Whether the U.S. Labor Department indicates high or low unemployment rates — the jobs are always there for people who know how to market themselves.

2. Today you need a great resume. The fact is that competing with a single resume is like a major company only being allowed to use a single advertisement. The people who do best today have a package of resumes designed for specific applications.

3. Recruiters are a prime source of job opportunities. While still an important resource, the role of recruiters has been decreasing. The reason is that 300,000 employers now list many very good jobs only on their websites. It’s cheaper to recruit that way.

4. Sending out lot of resumes is the key to success. The reality is that sending out a one-page letter to your best prospects will almost always outproduce any cover letter and resume you might forward. Today you need to rely more on benefit letters-short letters about what you can do for someone.

5. Most jobs are found via contacts. Networking can produce results, especially with the growing influence of major social networking sites. However, the unfortunate reality is it can be quite time consuming. The key here is to have a personal marketing website that features an outstanding description of your skills and what you can do. After all, how hard is it to send someone a link to your website?

6. If I can get the interview, then I’ll get the job. Competition is higher than ever before. Some would say it is fierce. Besides you-there are going to be five to eight other equally talented candidates available for every position you get considered for. So interviewing the right way-knowing how to build chemistry and overcome objections is not always an easy task.

7. I think I’m very marketable — I can get a new job in about a month. Unfortunately, you’re in a market where 200 or more candidates routinely apply for attractive jobs. A top job that is advertised in the Wall Street Journal might draw 1,500, and many blue chip companies receive 500 resumes for every person they hire. All of these things are why it’s wise to approach job hunting with realistic expectations and a well-thought out marketing game plan.

Robert James Gerberg is among America’s foremost authorities on professional job hunting. For more than 25 years he has authored dozens of books and multimedia presentations. He is also the creator of the TAPIT Worldwide System-a way for people to instantly connect with 97 percent of all jobs that are advertised anywhere in the U.S. — and also recent continuous daily leads and contacts.

Visit the Amazon author page for Mr. Gerberg to learn more about the new book, “An Easier Way to Change Jobs,” and other works, at: http://amzn.com/e/B00L5PD36W. 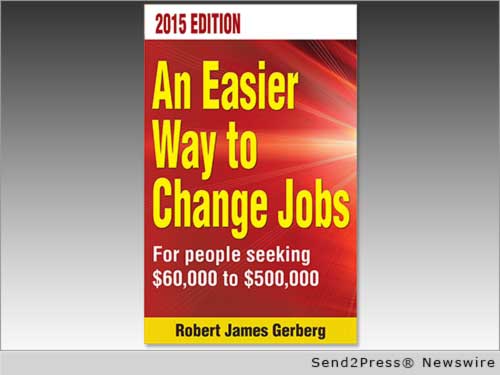 NEWS ARCHIVE NOTE: this archival news content, issued by the news source via Send2Press Newswire, was originally located in the Send2Press® 2004-2015 2.0 news platform and has been permanently converted/moved (and redirected) into our 3.0 platform. Also note the story “reads” counter (bottom of page) does not include any data prior to Oct. 30, 2016. This press release was originally published/issued: Mon, 06 Oct 2014 07:00:01 +0000