KING OF THA HILLS presents distinctive individuality with phrases like “In the streets I’m aktive.” Combined with Zaytoven’s Grammy award winning and industry leading trap sound, Aktive is undeniably one of the most original and exclusive songs to ever premiere out of both the San Diego region and the music industry.

In recognition, KING OF THA HILLS artists Stones (Nijael Thomas), IceKold (Christopher Humphries), T-Mili (Ta’Ron Taylor), and Charlie (Tiras Thomas) have all made MTV/VH1 cameo appearances in platinum recording artist Young Dro’s latest music videos for “We Be In The City” and “UGH.”

They have also collaborated with Young Dro and Charlie on a record titled “Pull Up.” Independently, KING OF THA HILLS has contributed to the development of the San Diego music scene in creating a new wave of Hip Hop while establishing an indisputable eminence in the music industry. In lieu of all their present accomplishments, KING OF THA HILLS will be honored to showcase San Diego music talent on a modern day platform. 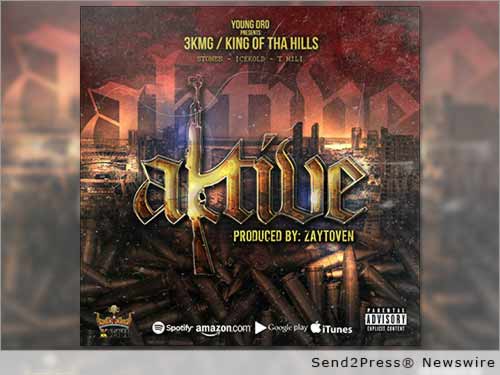 NEWS ARCHIVE NOTE: this archival news content, issued by the news source via Send2Press Newswire, was originally located in the Send2Press® 2004-2015 2.0 news platform and has been permanently converted/moved (and redirected) into our 3.0 platform. Also note the story “reads” counter (bottom of page) does not include any data prior to Oct. 30, 2016. This press release was originally published/issued: Fri, 15 Jan 2016 06:00:53 +0000

More from KING OF THA HILLS

ABOUT THE NEWS SOURCE:
KING OF THA HILLS

LEGAL NOTICE AND TERMS OF USE: The content of the above press release was provided by the “news source” KING OF THA HILLS or authorized agency, who is solely responsible for its accuracy. Send2Press® is the originating wire service for this story and content is Copr. © KING OF THA HILLS with newswire version Copr. © 2016 Send2Press (a service of Neotrope). All trademarks acknowledged. Information is believed accurate, as provided by news source or authorized agency, however is not guaranteed, and you assume all risk for use of any information found herein/hereupon.