“The team at Laidlaw’s Harley couldn’t be more excited to offer the corporate Harley-Davidson factory demo fleet experience exclusively to Baldwin Park and Los Angeles! We welcome all riders to test the newest models in our Harley-Davidson line up. From stripped down Dark Custom bikes to our premium Touring models, we’ll have a selection of the best Harley-Davidson has to offer,” said General Manager Richard Litchfield of Laidlaw’s Harley-Davidson. “If you’ve never experienced a Harley-Davidson or have been thinking for a while about that upgrade, this is your opportunity and it’s completely free of charge, just show up with your motorcycle license!”

Laidlaw’s Harley will be hosting great activities for riders and non-riders. For those interested in learning how to ride, we encourage you to try our “JUMPSTART.” This stationary motorcycle allows aspiring riders to learn how to start, shift and twist the throttle on a fully-functioning motorcycle that does not move. No motorcycle license required!

Due to the demand from riders, since 2008, Harley-Davidson Motor Company has tripled its fleet of motorcycles offered for dealer demo events. In addition, on a daily basis Laidlaw’s Harley offers individual test ride opportunities. We offer test rides for all licensed riders during the riding season. 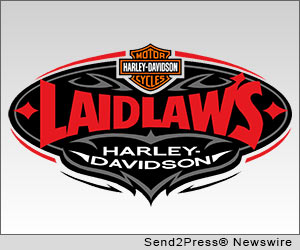 NEWS ARCHIVE NOTE: this archival news content, issued by the news source via Send2Press Newswire, was originally located in the Send2Press® 2004-2015 2.0 news platform and has been permanently converted/moved (and redirected) into our 3.0 platform. Also note the story “reads” counter (bottom of page) does not include any data prior to Oct. 30, 2016. This press release was originally published/issued: Wed, 05 Jun 2013 18:44:00 +0000

ABOUT THE NEWS SOURCE:
Laidlaw's Harley-Davidson

LEGAL NOTICE AND TERMS OF USE: The content of the above press release was provided by the “news source” Laidlaw's Harley-Davidson or authorized agency, who is solely responsible for its accuracy. Send2Press® is the originating wire service for this story and content is Copr. © Laidlaw's Harley-Davidson with newswire version Copr. © 2013 Send2Press (a service of Neotrope). All trademarks acknowledged. Information is believed accurate, as provided by news source or authorized agency, however is not guaranteed, and you assume all risk for use of any information found herein/hereupon.