Send2Press › Wire › General Editorial › Family and Parenting › [DEFUNCT] LegacyGRAM Helps to Save Your Life’s Stories and Share Them with Loved Ones, Even After You’re Gone

[DEFUNCT] LegacyGRAM Helps to Save Your Life’s Stories and Share Them with Loved Ones, Even After You’re Gone

[DEFUNCT] this company appears to be out of business. Content retained only for historical purposes.

OLDSMAR, Fla., Dec. 18, 2013 (SEND2PRESS NEWSWIRE) — LegacyGRAM (LegacyGRAM.com) allows users to record their most-treasured family stories, share them with their loved ones, and set them to be released now, or even after they’ve passed away.

The website prompts users with intuitive questions that jog your memory about the important events in your life. Then the site taps into your webcam and records you telling your story. Then you can set the video to be released now, or to be released after you’re gone. If you choose to share “After you’re gone,” the person receiving your LegacyGRAM can claim you video in a similar process as claiming a life insurance benefit. There is a simple form that to complete, LegacyGRAM verifies that the creator of the video has indeed passed away, and once confirmed, they release the video to the designated beneficiary.

Eric Kauk, the company’s founder was inspired to create LegacyGRAM by his grandmother, the late Diane Lener, a longtime Sarasota, Fla. resident who Kauk describes as the “the best story-teller in the world, not to mention the source of the best hugs on the planet.” Lener passed away in April 2013, and her ability to tell stories is the driving force behind the mission of the company. “Our mission is to help people save their family history through the stories they tell,” says Kauk.

The basic service is free at LegacyGRAM.com, while unlimited premium accounts are available for a one-time free of $20. But Kauk is trying to make the service free for many people. firefighters, police, EMT’s, military, and teachers can all join the site and get a Lifetime PREMIUM account for free by using the promo code: HERO.

Kauk says “We wanted to recognize the True Heroes in our communities, and we thought that the least we could do is to help Our Heroes save and share their stories.

Kauk has also teamed up with “Operation Give” ( http://www.operationgive.com/ ) to provide Premium Memberships to thousands of deployed Military and their families.

“We wanted to help deployed military to share their holiday memories with their loved ones, no matter where they are in the world.”

The most unique part about LegacyGRAM is that users can set their messages to be released ONLY to specific people, and can choose to release their message either now, or AFTER they have passed away.

Kauk adds, “We wanted to be able to offer people the ability to influence how they are remembered. Now, users can leave a special message as their true last words.”

LegacyGRAM.com also allows users to download end-of-life documents such as Living Will, Last Will & Testament, DNR, Power of Attorney, and Healthcare Surrogate forms for every state.

Please visit the site at http://www.legacygram.com/ for more information.

You can also view our VERY RECENT Press coverage here: 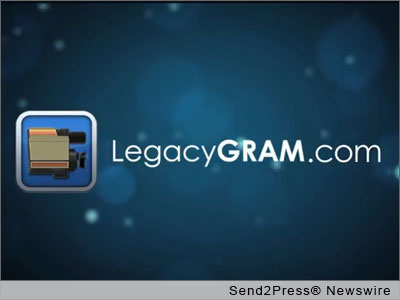 Alternate Headline: Save Your Life’s Stories and Share Them: LegacyGRAM Provides a New Way to Tell Your Story, Even After You’re Gone

NEWS ARCHIVE NOTE: this archival news content, issued by the news source via Send2Press Newswire, was originally located in the Send2Press® 2004-2015 2.0 news platform and has been permanently converted/moved (and redirected) into our 3.0 platform. Also note the story “reads” counter (bottom of page) does not include any data prior to Oct. 30, 2016. This press release was originally published/issued: Wed, 18 Dec 2013 18:02:23 +0000

ABOUT THE NEWS SOURCE:
LegacyGRAM

LEGAL NOTICE AND TERMS OF USE: The content of the above press release was provided by the “news source” LegacyGRAM or authorized agency, who is solely responsible for its accuracy. Send2Press® is the originating wire service for this story and content is Copr. © LegacyGRAM with newswire version Copr. © 2013 Send2Press (a service of Neotrope). All trademarks acknowledged. Information is believed accurate, as provided by news source or authorized agency, however is not guaranteed, and you assume all risk for use of any information found herein/hereupon.