Hammond is best known for being a member of the founding management team at Flagstar Bank, where he served in multiple roles including chief executive officer, president and vice chairman. At Flagstar, he was instrumental in growing the company from being a de novo bank to a major financial institution with a highly influential national presence, more than $16.8 billion in assets, and a well-respected brand name within the mortgage industry. He has also served on the advisory board for Fannie Mae, Freddie Mac and Real Estate One. Currently, Hammond is a managing partner of Alidade Capital, a Michigan-based private equity firm.

“Mark brings many years of mortgage banking experience to USFS and a proven track record of successfully growing organizations and increasing revenue,” said Jeff Ishbia, chairman and founder of USFS. “He will unequivocally play a pivotal role in taking USFS to new heights. We are very excited to add an executive of Mark’s caliber who possesses extensive strategic growth knowledge and capability.”

Hammond remarked: “After spending time with the team at USFS and closely evaluating its unique business model, expansion plans and vision, it was clear that there are many positive synergies we have in how to take USFS to the next level. Joining USFS as co-chairman was an easy decision for me to make and I am confident that we will attain our goals.”

“We have already been growing USFS at a very rapid rate and Mark shares our unwavering mission to establish us as one of the most wildly successful and respected mortgage lenders in the industry,” said Mat Ishbia, CEO of USFS and president of UWM. “I look forward to working with him and the positive impact he will have on USFS.”

Earlier this year, USFS brought its more than 1,200 employees together under one roof at its new state-of-the-art corporate headquarters located at 1414 Maple Road in Troy, Michigan. The move consolidated all of USFS’ team members from four locations in Birmingham, MI and Troy, MI into a single location on three floors with more than 140,000 square feet of new space. To officially unveil the new facility, Michigan Governor Rick Snyder visited USFS in a ribbon cutting ceremony to laud the company’s contributions to the community and its plans to hire 600 new employees by the end of 2013.

mortgage lender in the country, while Shore Mortgage is a nationally known, direct-to-consumer mortgage lender. Capital Mortgage Funding is a leading mortgage lender in southeastern Michigan. Together, the company employs more than 1,200 team members, projecting over $16 billion in originations and 600 additional employees in 2013. For more information, visit http://www.unitedshore.com/. 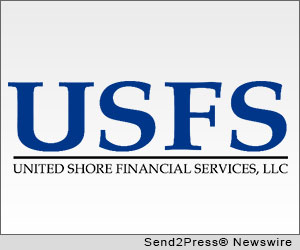 NEWS ARCHIVE NOTE: this archival news content, issued by the news source via Send2Press Newswire, was originally located in the Send2Press® 2004-2015 2.0 news platform and has been permanently converted/moved (and redirected) into our 3.0 platform. Also note the story “reads” counter (bottom of page) does not include any data prior to Oct. 30, 2016. This press release was originally published/issued: Mon, 24 Jun 2013 21:28:09 +0000

LEGAL NOTICE AND TERMS OF USE: The content of the above press release was provided by the “news source” United Shore Financial Services or authorized agency, who is solely responsible for its accuracy. Send2Press® is the originating wire service for this story and content is Copr. © United Shore Financial Services with newswire version Copr. © 2013 Send2Press (a service of Neotrope). All trademarks acknowledged. Information is believed accurate, as provided by news source or authorized agency, however is not guaranteed, and you assume all risk for use of any information found herein/hereupon.