Sidney says, "Most of the future is unpredictable. There is nobody psychic in the sense of knowing every detail of what's to come, but occasionally we get sneak peeks behind the curtain of tomorrow's theater. For fun and intrigue I interpret these impressions and release them."

CHICAGO, Ill., Dec. 22, 2014 (SEND2PRESS NEWSWIRE) — As seen for 16 years on numerous media including the “Today Show” and “The View” with a 72 percent overall accuracy to date, for the 17th straight year mentalist/futurist/author SIDNEY FRIEDMAN releases his annual predictions covering the Oscars, the economy, weather, celebrities and more. The full list of Friedman’s foresights for 2015 (plus results of previous years) is at: www.sidneyfriedman.com.

To be clear, Sidney says, “Most of the future is unpredictable. There is nobody psychic in the sense of knowing every detail of what’s to come, but occasionally we get sneak peeks behind the curtain of tomorrow’s theater. For fun and intrigue I interpret these impressions and release them.”

In his own words, here are a few of Sidney’s predictions:

1) Though a Polar Vortex was the news of last year, in 2015 I see a “Molar Vortex.” A story related to teeth will be in the news. Plus, I see a Solar Vortex (so to speak) this coming summer for Midwestern and east coast states.

2) I foresee, or actually “fore-smell,” something about an odor at city hall in either L.A., New York or Chicago. Yes, you can insert a joke here about odors and politics, but for real, something to do with a foul smell at one of these chambers is a story in 2015.

3) For the OSCARS, among strong competition, I predict Julianne Moore will win Best Actress for her movie “Still Alive.”

6) A hipster trips on his own beard.

7) Time stops. A scientific discovery is made regarding time and light.

9) A seiche of some magnitude occurs in one of the Great Lakes during the summer or early fall, most likely Lake Michigan.

10) An incident with a rock affects George and Amal Clooney.

11) Economically, the year to watch is 2016, where a shake and crash of several markets preceded by a surge of inflation occurs.

12) In the amazingly good news department, a breakthrough is announced in the cure for Parkinson’s disease and Alzheimer’s disease.

13) I also predict the CUBS will be in the World Series, but I predict this every year. And I’ll keep predicting it until it happens.

Meet Sidney live in person on New Year’s Eve, 10:30 p.m., in Chicago at his show of telepathy titled “New Year’s Psychic Eve,” which includes personal premonitions for the audience. It takes place at Davenport’s Cabaret, 1383 North Milwaukee Avenue. $30 (plus 2-drink minimum) includes champagne at midnight and more. Reservations may be made at 773-278-1830 or via http://www.sidneyfriedman.com/. 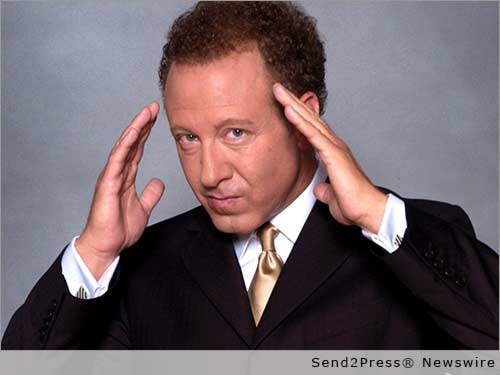 NEWS ARCHIVE NOTE: this archival news content, issued by the news source via Send2Press Newswire, was originally located in the Send2Press® 2004-2015 2.0 news platform and has been permanently converted/moved (and redirected) into our 3.0 platform. Also note the story “reads” counter (bottom of page) does not include any data prior to Oct. 30, 2016. This press release was originally published/issued: Mon, 22 Dec 2014 14:12:46 +0000

View More Chicago Business News
Sidney says, "Most of the future is unpredictable. There is nobody psychic in the sense of knowing every detail of what's to come, but occasionally we get sneak peeks behind the curtain of tomorrow's theater. For fun and intrigue I interpret these impressions and release them."

LEGAL NOTICE AND TERMS OF USE: The content of the above press release was provided by the “news source” Sidney Friedman Productions or authorized agency, who is solely responsible for its accuracy. Send2Press® is the originating wire service for this story and content is Copr. © Sidney Friedman Productions with newswire version Copr. © 2014 Send2Press (a service of Neotrope). All trademarks acknowledged. Information is believed accurate, as provided by news source or authorized agency, however is not guaranteed, and you assume all risk for use of any information found herein/hereupon.