"The games are mobile-friendly and have a memory/quiz combination format that's pretty unique," Hebert said. "With a Supreme Court appointment imminent in a Presidential election year, the Civics Match concept seems timely."

COVINGTON, Ky., March 16, 2016 (SEND2PRESS NEWSWIRE) — A web developer and veteran of the U.S. Navy is creating a series of online games honoring the 225th anniversary of ratification of the Bill of Rights. Michael Hebert, Owner/Operator of MH Virtual, LLC, was born in the ninth state to ratify the document (Rhode Island) and calls the game collection Civics Match.

He expects the project will encourage Americans to think about the importance of the first ten Constitutional amendments.

“The games are mobile-friendly and have a memory/quiz combination format that’s pretty unique,” Hebert said. “Even though I swore an oath to defend the Constitution upon entering service with the Navy and completed the Navy’s Legal Officer Course, my knowledge of the Constitution could be better and I suspect that’s the case for many Americans.”

He adds, “With a Supreme Court appointment imminent in a Presidential election year, the Civics Match concept seems timely.”

The first game, released on the anniversary of James Madison’s birthday (March 16th), is currently available at game1.civicsmatch.com. For the matching portion it makes use of images of quarters from the U.S. Mint’s 50 State Quarters Program. The quarters represent the first ten states to ratify the Bill of Rights, which became law when Virginia was the eleventh to ratify it on December 15th, 1791.

Project information and links to official sources of information about the Bill of Rights can be found at http://civicsmatch.com/. 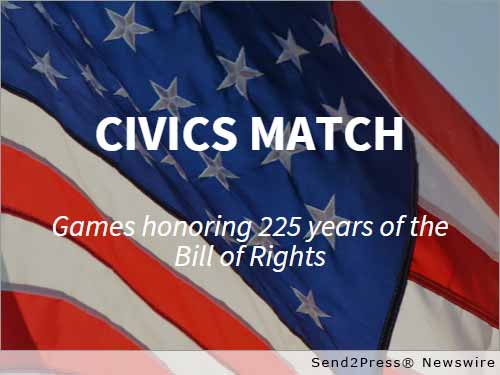 NEWS ARCHIVE NOTE: this archival news content, issued by the news source via Send2Press Newswire, was originally located in the Send2Press® 2004-2015 2.0 news platform and has been permanently converted/moved (and redirected) into our 3.0 platform. Also note the story “reads” counter (bottom of page) does not include any data prior to Oct. 30, 2016. This press release was originally published/issued: Wed, 16 Mar 2016 15:12:43 +0000

LEGAL NOTICE AND TERMS OF USE: The content of the above press release was provided by the “news source” MH Virtual LLC or authorized agency, who is solely responsible for its accuracy. Send2Press® is the originating wire service for this story and content is Copr. © MH Virtual LLC with newswire version Copr. © 2016 Send2Press (a service of Neotrope). All trademarks acknowledged. Information is believed accurate, as provided by news source or authorized agency, however is not guaranteed, and you assume all risk for use of any information found herein/hereupon.