"Seeing other people's memories is not all fun and games," Tolliver says. "While reliving the memories of a dreamer or a theologian might be a fascinating gift, a peek into the mind of a despot or psychopath can be horrific."

“Seeing other people’s memories is not all fun and games,” Tolliver says. “While reliving the memories of a dreamer or a theologian might be a fascinating gift, a peek into the mind of a despot or psychopath can be horrific.”

Told in the first person, the main character, John Calabrace, was never an ordinary child. While he grew up in ordinary circumstances, he possessed this extraordinary ability. A simple brush of the shoulder or light handshake quickly jolts John into a visual frenzy of emotions and memories that are not his own.

In an effort to escape the madness, he joins the Navy. The presence of an old nemesis causes him to seek refuge as a submariner. He quickly adjusts to life on the ocean’s floor and finally begins to feel safe. Just as he settles in, his gift is discovered and he is asked to return to the surface where his gift is used to serve his country.

Set in the 1980s, this pulsing pounding, adventure thriller now takes this hero from undersea to dangerous ground in Egypt, Yugoslavia and El Salvador. The question is, will the spinning moral compass of this brave, but tortured soul get him home alive?

Readers give it positive reviews and descriptions range from “fast-paced and suspenseful” to “interesting and captivating.”

“The Reflection of Innocence” is available at Amazon, BarnesandNoble.com and iBooks.

About the author:
John Tolliver spent six years working on submarines in the Navy. This experience was followed by a 30+ year career in the nuclear chemistry field. Today, he spends his time volunteering as a mediator and arbitrator in the New York courts and works in animal rescue. He is a New York native and lives in the Hudson Valley region of the state. His 20-year hobby of buying and selling gemstones has provided him with the opportunity to travel the globe and meet some of interesting people along the way. “The Reflection of Innocence” is his debut novel. 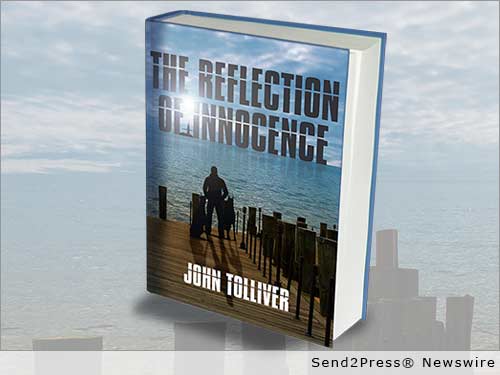 NEWS ARCHIVE NOTE: this archival news content, issued by the news source via Send2Press Newswire, was originally located in the Send2Press® 2004-2015 2.0 news platform and has been permanently converted/moved (and redirected) into our 3.0 platform. Also note the story “reads” counter (bottom of page) does not include any data prior to Oct. 30, 2016. This press release was originally published/issued: Wed, 13 Apr 2016 08:00:31 +0000

View More Books and Publishing News
"Seeing other people's memories is not all fun and games," Tolliver says. "While reliving the memories of a dreamer or a theologian might be a fascinating gift, a peek into the mind of a despot or psychopath can be horrific."

ABOUT THE NEWS SOURCE:
John Tolliver

LEGAL NOTICE AND TERMS OF USE: The content of the above press release was provided by the “news source” John Tolliver or authorized agency, who is solely responsible for its accuracy. Send2Press® is the originating wire service for this story and content is Copr. © John Tolliver with newswire version Copr. © 2016 Send2Press (a service of Neotrope). All trademarks acknowledged. Information is believed accurate, as provided by news source or authorized agency, however is not guaranteed, and you assume all risk for use of any information found herein/hereupon.