Dasso’s novels, “Past Aghast” (ISBN: 978-1480073654) and “In The Line of Ire” both stormed to the Amazon #1 spot as the Best-selling medical thriller, toppling some of the biggest names in publishing from the peak of its charts. “In The Line of Ire” remained at #1 for an unprecedented six consecutive weeks.

After many years in the medical field, and after spending nine years as a National Medical Director, Edwin Dasso wished to pursue his ambition to write fiction using his real-life medical experiences. The impetus to start writing came when a veteran friend of his called to tell him that he’d just learned about a mutual friend and Iraq veteran, who, suffering from PTSD, put a gun in his mouth as a way to end his pain.

Though this is a work of fiction, Edwin hoped it could bring some attention to the affliction of PTSD in veterans, which seems to be an issue largely ignored by most policy makers.

What the public has said about the Jack Black Cloud Chronicles series: “Forget G.I. Joe there is a new American hero and his name is Capt. Jack Bass!”

“If you like medical thrillers with mile a minute action, suspense and thrills in the plot line and a mix of complex and fascinating characters, both good and evil, then In the Line of Ire, is definitely for you.” – One of the many 5 Star Amazon reviews.

All novels in the #1 Best-selling “Jack Bass Black Cloud Chronicles” are available for sale online in paperback and eBook.

*PHOTO Caption: “In the Line of Ire” by author Edwin Dasso. 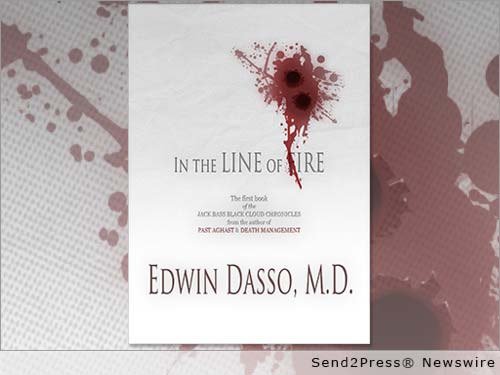 NEWS ARCHIVE NOTE: this archival news content, issued by the news source via Send2Press Newswire, was originally located in the Send2Press® 2004-2015 2.0 news platform and has been permanently converted/moved (and redirected) into our 3.0 platform. Also note the story “reads” counter (bottom of page) does not include any data prior to Oct. 30, 2016. This press release was originally published/issued: Thu, 01 May 2014 14:52:34 +0000

ABOUT THE NEWS SOURCE:
Edwin Dasso

LEGAL NOTICE AND TERMS OF USE: The content of the above press release was provided by the “news source” Edwin Dasso or authorized agency, who is solely responsible for its accuracy. Send2Press® is the originating wire service for this story and content is Copr. © Edwin Dasso with newswire version Copr. © 2014 Send2Press (a service of Neotrope). All trademarks acknowledged. Information is believed accurate, as provided by news source or authorized agency, however is not guaranteed, and you assume all risk for use of any information found herein/hereupon.