NEW YORK, N.Y., Sept. 28, 2015 (SEND2PRESS NEWSWIRE) — As one of the top assistant software for Android, the latest version of MobiKin Assistant for Android enables the exported HTML and txt files be classified and displayed according to the date to allow the users to find the target files easier than before. The enhanced interface adds the messages dialog bubble which will offer a clearer view of the text messages to users so that the SMS can be managed conveniently.

The developer department of MobiKin released the 1.6.53 version of MobiKin Assistant for Android after the hard work and efforts of several months with the expected new features. It is no doubt that the new version will improve the user experience, which meets MobiKin’s company pursuing of user first and the culture of people oriented.

MobiKin Assistant for Android was developed by many developers for a long time after the countless trial and error. Aiming at being a powerful and professional assistant to help the users manage the applications and files, this program was custom designed for Android smart phones or tablets. With high compatibilities, the software can support almost all brands of Android devices with different grades of operating systems to export and import data between devices and Windows or Mac computer directly and quickly.

“We will never stop optimizing our software and we set the goal as creating the best software for our customers. It is a long term process with no ending and actually no reason can stop our steps to make progresses and head for the greater destination to make better and better program,” said Mr. Steven, the MobiKin’s CEO. “In the past few years, our stuff endeavored to perfect our products and service with no efforts spared, which finally result in the MobiKin software series. With the advance of our technology and improvement of your products, we believe our software will be a great success!”

Main functions of the MobiKin Assistant for Android:

1. Capable of backup all the files like contacts, messages, apps, photos, music, videos, books, etc on computer with one click in seconds, no matter they are saved in internal memory space or external storage card.

3. There are two ways for users to connect the Android phones or tablets to the computer: use the USB cable or just connect wirelessly. Besides, the program can allow the users to set the music as the ringtones or phone alarm easily.

More details and supports about the software are in here: http://www.mobikin.com/android-backup/transfer-text-messages-from-android-to-computer.html.

About MobiKin Tech Development Co., Ltd.:
Being a promising software researcher and developer, MobiKin Inc. was established in 2007 and located in Hong Kong, China. Dedicated to the career of data backup and recovery of iOS and Android, MobiKin has been devoted to provide consumers with the perfect products and services worldwide for over 5 years. For more information, please visit http://www.mobikin.com/. 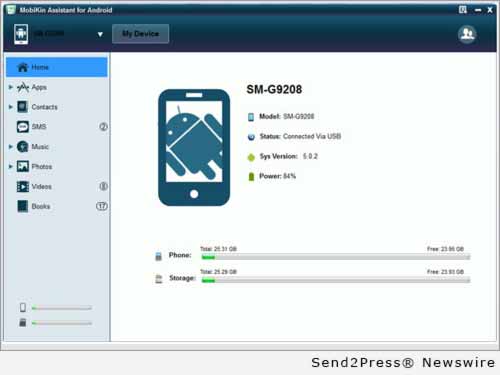 NEWS ARCHIVE NOTE: this archival news content, issued by the news source via Send2Press Newswire, was originally located in the Send2Press® 2004-2015 2.0 news platform and has been permanently converted/moved (and redirected) into our 3.0 platform. Also note the story “reads” counter (bottom of page) does not include any data prior to Oct. 30, 2016. This press release was originally published/issued: Mon, 28 Sep 2015 16:21:14 +0000

LEGAL NOTICE AND TERMS OF USE: The content of the above press release was provided by the “news source” MobiKin Tech Development Co. Ltd. or authorized agency, who is solely responsible for its accuracy. Send2Press® is the originating wire service for this story and content is Copr. © MobiKin Tech Development Co. Ltd. with newswire version Copr. © 2015 Send2Press (a service of Neotrope). All trademarks acknowledged. Information is believed accurate, as provided by news source or authorized agency, however is not guaranteed, and you assume all risk for use of any information found herein/hereupon.