"Our audience is always interested in hearing about local accomplishments and the details behind Wing Lam and Wahoo's Fish Taco is what I think of as the American success story," said host Dino Katsiametis.

Dino Katsiametis interviews local experts in real estate, finance, investments and business every week on his popular radio show. Dino dedicates this episode to his father, also a local restaurateur, who believed success was a result of creativity and exceptional customer care.

Wing Lam, the face of Wahoo’s Fish Tacos, started the surf-inspired taco chain with his brothers Mingo and Eduardo Lee in 1988 in Costa Mesa, and they now have 65 restaurants across seven states.

Listeners can always expect Dino to ask the questions they want answered. Dino asks Wing about the challenges of starting a business and the most valuable lessons learned; for example, how Wahoo’s was able to leverage the surf industry and what it means to do business today in the economy of the New America.

“Our audience is always interested in hearing about local accomplishments and the details behind Wing Lam and Wahoo’s Fish Taco is what I think of as the American success story,” said host Dino Katsiametis. “For myself and our listeners, inspiring stories like this one give us hope and an education we can use when pursuing our entrepreneurial dreams,” Katsiametis added.

Wing Lam is also known for seamlessly blending his business success with his passion for philanthropy. On the show, Lam will talk about Project Hope Alliance, an organization that is waging war on the homelessness sweeping through the streets of Orange County. Wahoo’s: The American Success Story is available for on demand listening.

About Money Matters with Dino:
Since 2012, Money Matters with Dino has featured top local financial, legal, real estate and business professionals on the show in order to bring their knowledge and expertise to as many people as possible. By design, Money Matters With Dino encourages its guests to share their experiences in business so that listeners may make more educated and informed decisions around their own personal finances. All shows are recorded and available for on-demand viewing and download. 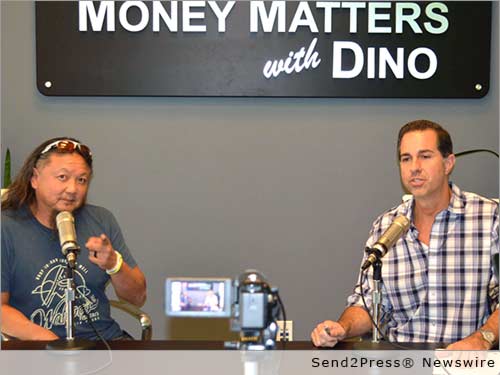 NEWS ARCHIVE NOTE: this archival news content, issued by the news source via Send2Press Newswire, was originally located in the Send2Press® 2004-2015 2.0 news platform and has been permanently converted/moved (and redirected) into our 3.0 platform. Also note the story “reads” counter (bottom of page) does not include any data prior to Oct. 30, 2016. This press release was originally published/issued: Mon, 10 Nov 2014 15:34:29 +0000

View More Broadcasting and Podcasting News
"Our audience is always interested in hearing about local accomplishments and the details behind Wing Lam and Wahoo's Fish Taco is what I think of as the American success story," said host Dino Katsiametis.

ABOUT THE NEWS SOURCE:
Dino Katsiametis

LEGAL NOTICE AND TERMS OF USE: The content of the above press release was provided by the “news source” Dino Katsiametis or authorized agency, who is solely responsible for its accuracy. Send2Press® is the originating wire service for this story and content is Copr. © Dino Katsiametis with newswire version Copr. © 2014 Send2Press (a service of Neotrope). All trademarks acknowledged. Information is believed accurate, as provided by news source or authorized agency, however is not guaranteed, and you assume all risk for use of any information found herein/hereupon.