Team Captain Melissa Johnson commented, "We are so excited to advance to the World Championship, and very proud to represent both our school and the entire Southern California FIRST Tech Challenge region."

MONROVIA, Calif., April 7, 2015 (SEND2PRESS NEWSWIRE) — The Monrovia High Robotics Program announced today that the ten Monrovia High School students of the “Kings and Queens” robotics team and their purple robot “Sir Lancelot” qualified to advance to the 2015 FIRST Tech Challenge Robotics World Championships for a second year in a row as a result of their excellent performance at the West Super-Regional Robotics Tournament held in Oakland March 26-28.

The tournament brought together 72 champion teams who were winners at state and regional competitions held in 13 western states. The Kings and Queens will be among the 128 top teams from around the world to compete at the World Championships which will be held at the historic Union Station in St. Louis April 22-25. Only 42 teams who competed in last year’s World Championship earned the right to come back again this year.

The Kings and Queens team, four seniors, one sophomore and five freshmen, designed and built their own 18 by 18 inch robot from t-slot channel, Plexiglas, and formed aluminum to compete in the annual FIRST Tech Challenge (FTC) robotics competition. 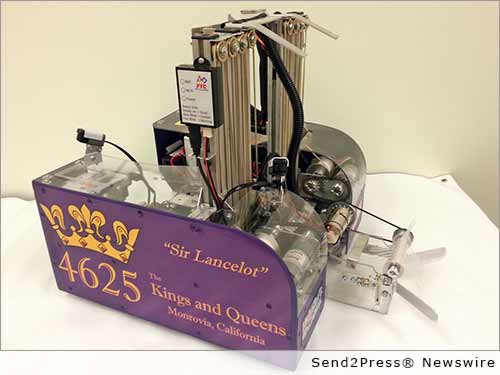 Each year FTC creates a new game challenge and teams build a new robot to accomplish the requirements of that season’s game. This season’s challenge is to gather up hollow “wiffle” baseballs and golf balls from the playing field and fill goals made of vertical plastic tubes up to four feet high while never touching the tubes themselves.

The Kings and Queens are well known in the FTC community for their driving skill, unique robot designs, their signature costumes of purple velvet gold-embroidered renaissance dresses and gold tiaras for the girls and fur-trimmed black velvet jerkins with purple capes and gold crowns for the boys, and for their supporter’s cheer of “Huzzah!” whenever they score points.

Team Captain Melissa Johnson commented, “We are so excited to advance to the World Championship, and very proud to represent both our school and the entire Southern California FIRST Tech Challenge region.”

Donations may be made through the team’s GoFundMe page at http://www.gofundme.com/kingsandqueens2015. 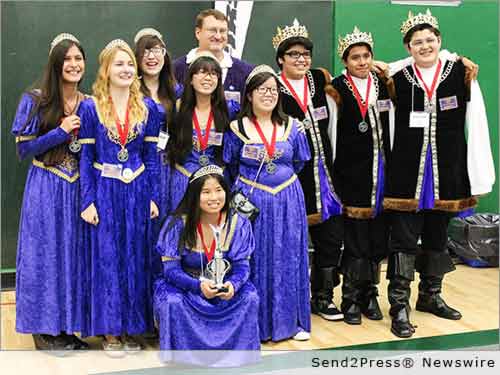 NEWS ARCHIVE NOTE: this archival news content, issued by the news source via Send2Press Newswire, was originally located in the Send2Press® 2004-2015 2.0 news platform and has been permanently converted/moved (and redirected) into our 3.0 platform. Also note the story “reads” counter (bottom of page) does not include any data prior to Oct. 30, 2016. This press release was originally published/issued: Tue, 07 Apr 2015 09:01:13 +0000

View More Awards and Honors News
Team Captain Melissa Johnson commented, "We are so excited to advance to the World Championship, and very proud to represent both our school and the entire Southern California FIRST Tech Challenge region."

LEGAL NOTICE AND TERMS OF USE: The content of the above press release was provided by the “news source” Monrovia High School Robotics Program or authorized agency, who is solely responsible for its accuracy. Send2Press® is the originating wire service for this story and content is Copr. © Monrovia High School Robotics Program with newswire version Copr. © 2015 Send2Press (a service of Neotrope). All trademarks acknowledged. Information is believed accurate, as provided by news source or authorized agency, however is not guaranteed, and you assume all risk for use of any information found herein/hereupon.