"I have devoted my life to providing an authentic experience to pop culture without compromise," said Damon Dash.

RALEIGH, N.C., Aug. 7, 2015 (SEND2PRESS NEWSWIRE) — Pop culture king Damon “Dame” Dash has amassed a treasure-trove of media since his career ignited in Harlem. Now the actor, entrepreneur, CEO and executive producer wants to make all of his own content accessible to fans with the launch of an on-demand streaming website similar to Netflix, accessible through DameDashStudios.com.

Dash’s creative juices started flowing when he co-founded Roc-A-Fella Records in the mid-1990’s. “I have devoted my life to providing an authentic experience to pop culture without compromise,” said Dash. “Now my music, movies, documentaries and self-help training videos and books will be aggregated at a single, easy to access distribution point going live on Tuesday, September 1, 2015.”

Dash sold his interest in Roc-A-Fella and moved ahead with his own production company discovering, casting and producing Kevin Hart and Lee Daniels in multiple movie projects. He went on to sign award winning musical acts including The Black Keys. After hearing the Ohio-based rock duo, Dash produced their album “BlakRoc” featuring guest appearances from Mos Def, Pharoahe Monch and the late Ol’ Dirty Bastard among others. The album soared to become one of the top Rap Albums of 2009.

Traveling to Europe, South America and Asia, Dash continued to discover talent and launch careers. He quickly moved into the production of Hollywood pop-culture movies and television series as well as documentaries. IMDb (Internet Movie Database) credits Dash as producer on more than 20 movie projects, including the critically acclaimed “Woodsman,” starring Kevin Bacon, “Shadowboxer” with Helen Mirren, Cuba Gooding, Jr. and Lee Daniels, “Streets is Watching,” “State Property” and “State Property 2,” which he wrote, directed and appeared, and the highly praised “Paid in Full.”

Kanye West, protege of Damon Dash since the early 90’s, joined him on production of the motion picture “Loisaidas” staring Murda Mook. Dash and West just released a new action-packed movie, “Too Honorable” featuring cousin, Stacey Dash (“Clueless”), Eishia Brightwell, Julito McCullum, Cam’ron, Nicholas Turturro, and Michael Rispoli. Dash is the director and has a featured role in the project.

He has opened media collective galleries in New York, Hong Kong, Charleston, and the newest one in Albemarle, North Carolina featuring showcase art and music. The new streaming service will be a broader, on-demand version of his galleries.

Dash has also been producing self-help videos based around organizational life skills such as research, planning, and effective decision-making. He has a series of interviews with entertainment notables, spiritual leaders, entrepreneurs and executives, motivational speakers and more. He is currently penning a new book, “Culture Vultures.”

In 1999 Dash co-founded Rocawear, a hugely successful line of clothing, footwear, fragrance and fashion accessories. Dash later sold his stake in Rocawear and focused on the creation of the Rachel Roy clothing collection, now an international brand with the RACHEL by Rachel Roy line available in Macy’s.

Having recently moved to North Carolina, Dash is finding a great deal of talented people in his new home base. “I have identified an amazing array of talent here. We are launching new music, videos and movies every day.”

While deeply involved in the business of entertainment and fashion, Dash is expanding his brand launching a German Riesling wine he calls Dusko Blu and he is introducing new spirit from Spain, Dusko Whiskey. He owns a motor oil company, Dash Motors and is launching an on-line teaching forum: PoppingtonUniversity.com

Damon “Dame” Dash has amassed an amazing portfolio of music, video and pop culture entertainment — all of which will be available on the new subscription website http://DameDashStudios.com/ on September 1, streaming to your home for $49.99 annually or $9.99 a month. Subscribers who preorder before the launch will receive a 50 percent reduction for the first year. 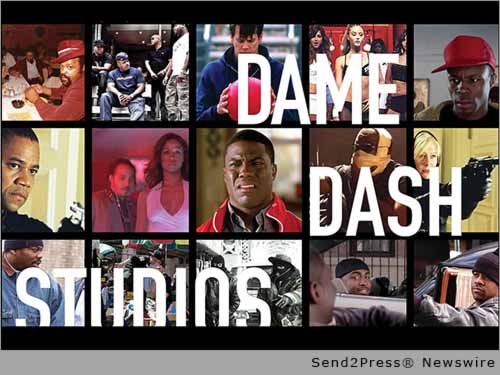 NEWS ARCHIVE NOTE: this archival news content, issued by the news source via Send2Press Newswire, was originally located in the Send2Press® 2004-2015 2.0 news platform and has been permanently converted/moved (and redirected) into our 3.0 platform. Also note the story “reads” counter (bottom of page) does not include any data prior to Oct. 30, 2016. This press release was originally published/issued: Fri, 07 Aug 2015 16:32:54 +0000

ABOUT THE NEWS SOURCE:
DameDashStudios.com

LEGAL NOTICE AND TERMS OF USE: The content of the above press release was provided by the “news source” DameDashStudios.com or authorized agency, who is solely responsible for its accuracy. Send2Press® is the originating wire service for this story and content is Copr. © DameDashStudios.com with newswire version Copr. © 2015 Send2Press (a service of Neotrope). All trademarks acknowledged. Information is believed accurate, as provided by news source or authorized agency, however is not guaranteed, and you assume all risk for use of any information found herein/hereupon.