"Our mental health system is broken. We need to fix this before more crimes are committed," says author Shuvender Sem.

LANCASTER, Pa., Feb. 19, 2013 (SEND2PRESS NEWSWIRE) — It is a story that could only be written by one person. A compelling autobiography that not only pushes the boundaries of sanity, it takes readers on a frightening voyage to meet it face-to-face. “Murder and Misunderstanding; One Man’s Escape from Insanity” (ISBN-13: 978-1479256969) is the story of Shuvender Sem, who on March 1, 2004 became known as “The Maharishi Murderer.”

The murder took place in Fairfield, Iowa, on the campus of a university that prided itself on non-violence. The Maharishi University of Management used a variety of techniques towards its non-violent goals including twice-daily use of Transcendental Meditation. It was to no small degree that this setting put the murder in the national spotlight.

In one moment Sem was a college student. In the next he was “The Maharishi Murderer.” Shuvender killed freshman Levi Butler without provocation on the campus by stabbing him four times in the chest with a paring knife. The murder took place following an incident earlier in the day when Sem stabbed a student with a pen. That previous incident led to the student getting seven stitches to his face.

Deemed competent to stand trial, the judge ruled he was “not guilty by reason of insanity” at the request of both the defense and the prosecution. Against popular belief, NGRI is an extremely rare plea, used in less than one percent of criminal cases. A not guilty result is even more uncommon, occurring just one-quarter of one percent of the time.

Now, after years of psychotropic medications and intense therapy, Shuvender is telling his story of schizophrenia in his autobiography, “Murder and Misunderstanding; One Man’s Escape from Insanity.” It is not only an extremely rare look into the mind of a killer from his own perspective, but it is also a deeply personal story that explores the darkest, most grim places of the mind.

“Our mental health system is broken. We need to fix this before more crimes are committed,” says Sem.

In his book, Shuvender tells of his relationship with his father, and the events that led to that day on campus. He describes his struggle with, and eventual escape from this misunderstood illness. It is a story of recognition and realization. A story of redemption desired, and hope delivered. It is a book written to serve as a beacon for those with schizophrenia and their families, by a man who was held in its strongest grips, and managed to escape.

Shuvender Sem, or Shubi as he is known, now speaks publicly about his experience with schizophrenia in the hopes of helping others. He is available for presentations and Q&A sessions for law enforcement, mental health groups, attorney associations, academic institutions and others who may feel they can benefit from his story.

The self-told story of Shuvender Sem, “Murder and Misunderstanding; One Man’s Escape from Insanity” is available at http://www.ShuvenderSem.com/ . The book is available in paperback; as well as Kindle, iPad and Nook digital editions. 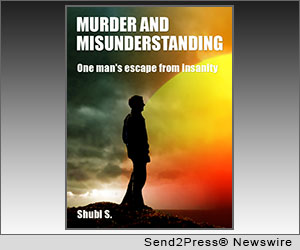 Alternate Headline: ‘Murder and Misunderstanding’ is an autobiography that pushes the boundaries of sanity, and takes readers on frightening voyage

NEWS ARCHIVE NOTE: this archival news content, issued by the news source via Send2Press Newswire, was originally located in the Send2Press® 2004-2015 2.0 news platform and has been permanently converted/moved (and redirected) into our 3.0 platform. Also note the story “reads” counter (bottom of page) does not include any data prior to Oct. 30, 2016. This press release was originally published/issued: Tue, 19 Feb 2013 14:47:52 +0000

View More Books and Publishing News
"Our mental health system is broken. We need to fix this before more crimes are committed," says author Shuvender Sem.

ABOUT THE NEWS SOURCE:
Shuvender Sem

LEGAL NOTICE AND TERMS OF USE: The content of the above press release was provided by the “news source” Shuvender Sem or authorized agency, who is solely responsible for its accuracy. Send2Press® is the originating wire service for this story and content is Copr. © Shuvender Sem with newswire version Copr. © 2013 Send2Press (a service of Neotrope). All trademarks acknowledged. Information is believed accurate, as provided by news source or authorized agency, however is not guaranteed, and you assume all risk for use of any information found herein/hereupon.