This easy-to-read book packs hundreds of helpful insights for anyone who is serious about changing jobs easier-and in less time. Some of his observations are as follows.

– Use seven or eight of the 15 channels into the market. For example, don’t restrict yourself to the major job boards, contacting a few recruiters and working your social network. In his book, Mr. Gerberg lists 15 ways for getting interviews that you can select from.

– Have specific job title goals. With over 30 million resumes in circulation, you need to pinpoint your job title goals and they must be right at the top of your resumes-to have any chance at all. For example, don’t just say Senior Executive-but do say VP Marketing.

– Be sure to broaden your appeal beyond your factual credentials. The easiest way to do this is to place more emphasis on selling your skills – than your history.

– Uncover emerging jobs before they go public. In this remarkably fast reading book, he specifies how you can do this – and how you can get considered ahead of competition.

– Create your own job. People have jobs created for them because if you can get in the door with the right decision maker, executives hire people they like. It’s surprising how many people create their own jobs.

– Convert your interviews to offers. Always remember there are five to seven other finalists in the running for each job and follow the proven rules for gaining a competitive edge that he outlines. Good interviewing isn’t simply about answering questions.

– Be sure to contact your best employer prospects-using a direct mail concept that works. In his new book, he reviews both macro and micro approaches for doing this.

-Add some telephone dynamics to power your marketing effort. With the methods this books reveals, you can achieve a lot in very little time.

– Market yourself to all key recruiters in your area-simultaneously. Remember, the chances of a single recruiter filling a job for you at the moment you contact them are very small.

– If you’re unemployed or have age concerns, make sure the major part of your job campaign is based on distributing highly compelling stand-alone marketing letters.

– Use a simple seven-step negotiating formula, and you’ll almost always be able to raise your offers by 10% or more. Mr. Gerberg’s book outlines the system he recommends.

There are many more of his new rules for making job changing easier and faster. In today’s market you don’t want to compete without being aware of them.

About the Author:
Robert James Gerberg is among America’s foremost authorities on professional job hunting. For more than 25 years he has authored dozens of books and multimedia presentations. He is also the creator of the TAPIT Worldwide System – a way for people to instantly connect with 97 percent of all jobs that are advertised anywhere in the U.S. – and also recent continuous daily leads and contacts. 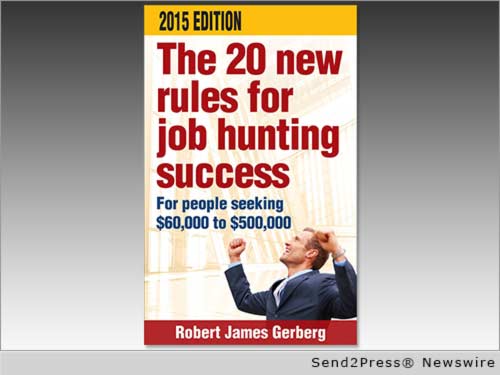 NEWS ARCHIVE NOTE: this archival news content, issued by the news source via Send2Press Newswire, was originally located in the Send2Press® 2004-2015 2.0 news platform and has been permanently converted/moved (and redirected) into our 3.0 platform. Also note the story “reads” counter (bottom of page) does not include any data prior to Oct. 30, 2016. This press release was originally published/issued: Mon, 29 Sep 2014 08:00:47 +0000