NEW YORK, N.Y., Sept. 22, 2014 (SEND2PRESS NEWSWIRE) — In a job market where CareerBuilder claims to have 125 million resumes posted on their website, Robert Gerberg, author of “The Professional Job Changing System” and dozens of other books on job hunting, has released entirely new guidelines for professionals and executives seeking from $60,000 to $300,000+ in his new book “An Easier Way to Change Jobs.”

This e-book, “An Easier Way to Change Jobs,” is available on Amazon.com for $4.95. Mr. Gerberg’s new ideas vary dramatically from the standard approaches used by people to look for jobs. In an era when Apple, General Electric, Lockheed Martin and other major firms receive millions of resumes annually, he recommends that people adapt major changes in four areas.

In Part One of this book, he contends people should adapt new and aggressive marketing approaches for pursuing the right new job.

He emphasizes that you need to understand how two separate job markets work-and how to allocate your energy where you can produce the most high quality interviews for both the public and private markets. He pinpoints 15 channels into the job market-ways for getting interviews.

In Part Two of his new book, Mr. Gerberg is critical over the haphazard way that many people go about their search. Most people use hit-or-miss approaches as they search for new jobs by trial and error.

Borrowing upon the marketing principles of major consumer brands such as Samsung, Toyota, Walmart, and others, he outlines how people can have a simple and straightforward marketing game plan-one that can produce six, seven, and even up to ten times as many interviews in much less time.

In Part Three of “An Easier Way to Change Jobs,” he recommends that people use a package of excellent creative materials for their search-instead of depending on a single resume. His experience is that this can be one of the easiest among the many faster ways to get a better job.

One resume is a single page universal resume – your main document for generating calls. The second is a resume for strictly using over the internet. The third is a special resume for use when contacting senior executives and for getting past gatekeepers.

He states that relying on a single resume is no different than a major company attempting to market its product with a single advertisement. It rarely works.

Part Four of this book is devoted to outlining the precise avenues for connecting to situations where private jobs are available and where there is significantly less competition.

Throughout this new book he offers simple and straightforward ways for people to help reduce the average time for unemployment, to overcome age concerns, and to minimize other issues that frequently bother people and restrict their interview activity.

About the Author:
Robert James Gerberg is among America’s foremost authorities on professional job hunting. For more than 25 years he has authored dozens of books and multimedia presentations. He is also the creator of the TAPIT Worldwide System-a way for people to instantly connect with 97 percent of all jobs that are advertised anywhere in the U.S. — and also recent continuous daily leads and contacts.

Visit the Amazon author page for Mr. Gerberg to learn more about the new book, “An Easier Way to Change Jobs,” and other works, at: http://amzn.com/e/B00L5PD36W. 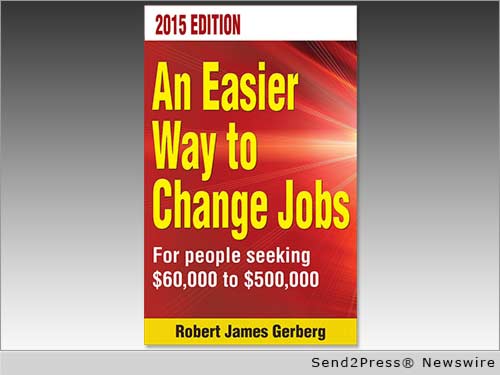 NEWS ARCHIVE NOTE: this archival news content, issued by the news source via Send2Press Newswire, was originally located in the Send2Press® 2004-2015 2.0 news platform and has been permanently converted/moved (and redirected) into our 3.0 platform. Also note the story “reads” counter (bottom of page) does not include any data prior to Oct. 30, 2016. This press release was originally published/issued: Mon, 22 Sep 2014 04:01:59 +0000