PRINCETON, N.J., July 30, 2014 (SEND2PRESS NEWSWIRE) — An informative new book, concerning the fate of Malaysia Flight MH370, together with comments on media treatment and the need for improved tracking has been published by Outskirts Press: “THE LANDING AT AIPOTU: A FANTASY ACCOUNT OF FLIGHT MH370” by John F. Brinster.

Media accounts of its aborted flight were merged with a fictional story in process at the time of its loss on 8 March 2014. Contrary to indications of the most likely scenario, it suggests alternatives for possible consideration.

“The Landing At Aipotu: A Fantasy Account of Flight MH370” by John F. Brinster, is based on speculation following its mysterious disappearance with no sign of debris found anywhere.

The new story is contained in the fifth book of the popular (Professor) Cackekry series, a collection of unusual books of subtle literary satire on behavioral function of the mammalian human mind, especially with respect to incessant warfare, increased terrorism, and unending religious conflict. Aipotu, Utopia in reverse, is a natural plateau and airstrip located in the heart of the Himalayas described in prior books.

Copies of recent books are available to qualified reviewers through the publisher (Outskirts Press, 10940 S. Parker Rd, Parker, CO 80134; Tel 1 888-672-6657) and for sale to the public, in paper and electronic format, are from outlets such as Amazon, Barnes & Noble, and Apple iBooks. See reference website: http://www.Brinsterbooks.com/. 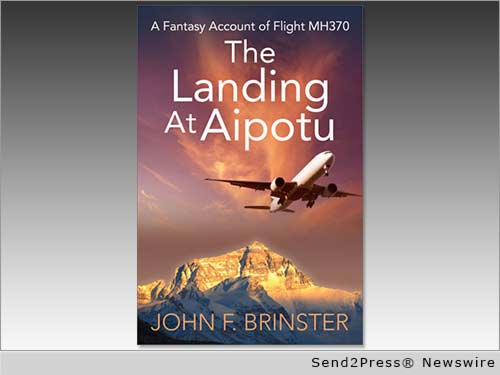 Alternate Headline: ‘The Landing at Aipotu: A Fantasy Account of Flight MH370’ by John F Brinster, is based on speculation following mysterious disappearance

NEWS ARCHIVE NOTE: this archival news content, issued by the news source via Send2Press Newswire, was originally located in the Send2Press® 2004-2015 2.0 news platform and has been permanently converted/moved (and redirected) into our 3.0 platform. Also note the story “reads” counter (bottom of page) does not include any data prior to Oct. 30, 2016. This press release was originally published/issued: Wed, 30 Jul 2014 19:02:55 +0000