"With so little of the world's water being drinkable, it makes sense for us to conserve as much of it as we can for human consumption. Each year, billions of gallons of drinking water are thrown onto plants. This 'human water' not only shortens the lifespan of plants, but it leaves less of it for us," explains John Heary, CEO of Waterator Industries Inc.

VANCOUVER, British Columbia, Nov. 10, 2014 (SEND2PRESS NEWSWIRE) — While Peon may look like an inconspicuous little plastic frog, he is about to make a vital contribution to global conservation efforts, by watering plants using water – well – out of thin air. It’s all thanks to Canada’s Waterator Industries Inc., who are pioneering a new use for Atmospheric Water Generation. With less than 3 percent of the world’s water being drinkable, the device will save the precious stuff coming out of taps from being used for a non-consumable purpose.

To get Peon on the market and ribbiting its way around the world, Waterator Industries Inc. is currently raising vital funds through Kickstarter.

“With so little of the world’s water being drinkable, it makes sense for us to conserve as much of it as we can for human consumption. Each year, billions of gallons of drinking water are thrown onto plants. This ‘human water’ not only shortens the lifespan of plants, but it leaves less of it for us,” explains John Heary, CEO of Waterator Industries Inc. “Water particles in the air are instantly replenished through a number of natural processes, so it makes sense for us to develop a device that can water plants through humidity. This water is 100 percent natural and can keep plants alive for five to ten years.”

Operating Peon is as simple as plugging him into the wall, inserting his “soil stake” into a potted plant and sitting back in the knowledge that the world’s ultimately-scarce supplies of clean drinking water are being put to better use.

“Innovation aside for moment, Peon can make life a whole lot easier. There’s no longer a need to worry about watering plants while on vacation, with The Peons three water settings, it allows the perfect trickle of water for any particular plant type. The electricity costs are just a fraction, per liter, of paying for water from the grid and users can literally set-and-forget their plants as they last many lifetimes longer than hand-watering from the tap,” Heary adds.

Waterator Industries Inc. needs to raise $250,000 over the next month to keep the project alive. Those backing its Kickstarter campaign will be treated to a host of rewards ranging from their name on the company’s website through to branded T-shirts, hats and Peons in a host of different colors.

This is just the start of things for the company, who plan to offer Peons in a range of sizes, shapes and designs, as well as adapt their Atmospheric Water Generation technology to other uses that support the conversation of clean drinking water.

Peon will eventually retail for $29.95 + shipping and handling. However, those backing the Kickstarter campaign can get hold of theirs before anyone else.

For more information and to support this most unique of inventions, visit: http://kck.st/1tY1GKe.

About Waterator Industries:
Waterator Industries is a small company and outsources most of its needs to various companies to help keep internal costs low, as well as to be able to improve their manufacturing capabilities at a moment’s notice. This allows them to put most of the funds received directly into building inventory as well as creating new products.

The company and their products were created during a time when the economy was in decline and money for new projects was limited. Never giving up hope, they moved forward funding it completely out of their own pockets, knowing the end goal was worth it. With personal funds expended, they are now reaching out to the public to help complete the dream. Website: http://www.waterator.com/. 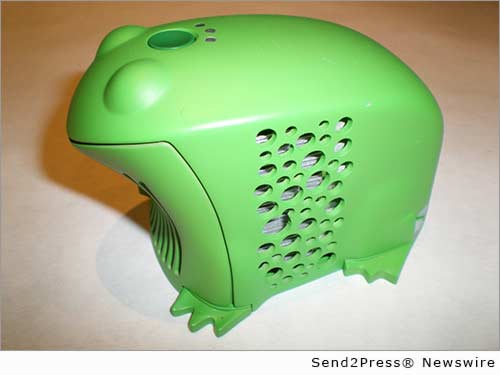 Alternate Headline: Kickstarter Campaign: Waterator Industries Inc. is changing the face of conservation by using vapor in the air

NEWS ARCHIVE NOTE: this archival news content, issued by the news source via Send2Press Newswire, was originally located in the Send2Press® 2004-2015 2.0 news platform and has been permanently converted/moved (and redirected) into our 3.0 platform. Also note the story “reads” counter (bottom of page) does not include any data prior to Oct. 30, 2016. This press release was originally published/issued: Mon, 10 Nov 2014 09:00:06 +0000

View More Agriculture News
"With so little of the world's water being drinkable, it makes sense for us to conserve as much of it as we can for human consumption. Each year, billions of gallons of drinking water are thrown onto plants. This 'human water' not only shortens the lifespan of plants, but it leaves less of it for us," explains John Heary, CEO of Waterator Industries Inc.

LEGAL NOTICE AND TERMS OF USE: The content of the above press release was provided by the “news source” Waterator Industries Inc. or authorized agency, who is solely responsible for its accuracy. Send2Press® is the originating wire service for this story and content is Copr. © Waterator Industries Inc. with newswire version Copr. © 2014 Send2Press (a service of Neotrope). All trademarks acknowledged. Information is believed accurate, as provided by news source or authorized agency, however is not guaranteed, and you assume all risk for use of any information found herein/hereupon.