"I hope this novel will bring awareness to people that nature is a powerful force to be embraced and respected," says author Andrew Branham.

“Parched” is set in an inhospitable environment, where the sun has assumed the role of what scientists are calling the “red giant.”

This page-turning thriller follows one family on a harrowing journey from California to Ohio. When their home is abruptly robbed and burned to the ground, they are forced to make the trek in search of safety and water.

Governments have collapsed, cities are burning, lakes are dry and the environment is completely engulfed in extreme heat and practically devoid of water. Death is imminent. Facing ruthless bandits, murderers, and some of the most extreme conditions they have ever encountered, they struggle to survive. At one point, they make their home in an abandoned Ohio salt mine deep under Lake Erie, but challenges continue to face them.

It was while Branham was living in the East Bay of California during the drought that he was first inspired to write this novel. “I began to imagine a world where water was more valuable than gold,” he says. “I visualized what it would be like to live with extreme temperatures and an anarchical society, envisioning how mankind would react to such a scenario and the lengths people would go to survive. Having grown up in a town on Lake Erie, I decided to incorporate the Great Lakes and my hometown of Lorain, Ohio.”

Branham balances beauty with destruction to create a thriller that the reader is not soon to forget.

“I hope this novel will bring awareness to people that nature is a powerful force to be embraced and respected,” he says.

Many readers previewed the book and had positive things to say. James Henkle said, “Every so often a new fiction author emerges that shakes up the norm in the literary world. ‘Parched’ does just that and may rival books such as ‘The Road’ by Cormac McCarthy. This is an extremely thrilling story with a great environmental message and prose that can be compared to the best of the best.”

Published by Ant Press, “Parched,” part one of a three-book series, is available in paperback and for the Kindle.

Find the book on Amazon at: http://www.amazon.com/dp/B01DR16USY.

About the Author:
Andrew Branham is a business executive with a degree in environmental science. He lives in Jackson, Mich. and is married with one daughter. He is an avid writer and has contributed articles and editorials to multiple major newspapers and websites throughout the country. His memoir, “Anything for Amelia,” an Amazon best seller, was published in 2015 and has won numerous awards and honors. 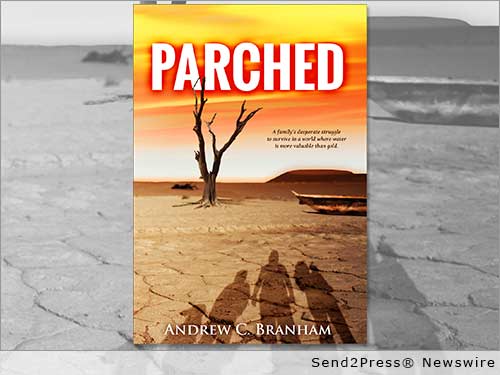 NEWS ARCHIVE NOTE: this archival news content, issued by the news source via Send2Press Newswire, was originally located in the Send2Press® 2004-2015 2.0 news platform and has been permanently converted/moved (and redirected) into our 3.0 platform. Also note the story “reads” counter (bottom of page) does not include any data prior to Oct. 30, 2016. This press release was originally published/issued: Wed, 13 Apr 2016 09:00:04 +0000

View More Books and Publishing News
"I hope this novel will bring awareness to people that nature is a powerful force to be embraced and respected," says author Andrew Branham.

ABOUT THE NEWS SOURCE:
Andrew Branham

LEGAL NOTICE AND TERMS OF USE: The content of the above press release was provided by the “news source” Andrew Branham or authorized agency, who is solely responsible for its accuracy. Send2Press® is the originating wire service for this story and content is Copr. © Andrew Branham with newswire version Copr. © 2016 Send2Press (a service of Neotrope). All trademarks acknowledged. Information is believed accurate, as provided by news source or authorized agency, however is not guaranteed, and you assume all risk for use of any information found herein/hereupon.